Drinking while driving is recognized as issue to be addressed 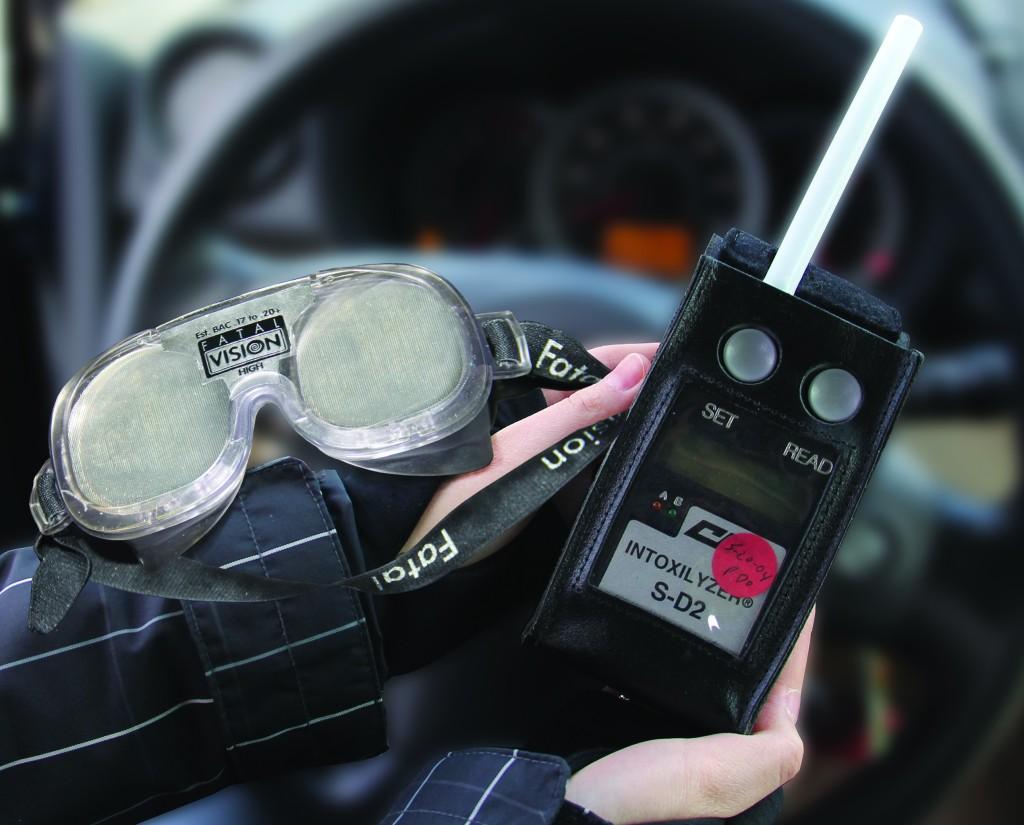 The security office keeps a breathalyzer to ascertain blood alcohol levels, and Fatal Vision goggles are used as part of Driver’s Education unit on DWI.

“Everything was distorted and sideways. The goggles gave me a headache when I tried to concentrate,” Williams said.

The other staple of every public high school’s sobriety kit is a breathalyzer. Although Harrington has no knowledge of a Jefferson student tested for drug or alcohol use while driving, there have been a number of cases of students coming to school under the influence or drinking on campus during his 10 years as the school resource officer.

“TJ students are aware of what they have to lose,” Harrington said. “Their level of investment is different from other public high schools so they make either good choices or are very careful.”

Overall, there has been an increase of alcohol use in Fairfax County Public Schools (FCPS).

According to the most recently released Fairfax County Youth Survey, there was a 0.7 increase in alcohol-use and a 0.4 percent increase in binge drinking among students who reported between the school years ending 2011 and 2012. The increase in underage drinking also comes with greater risk for cases of drinking and driving.

In 2012, there were 205 total teen arrests for driving while intoxicated (DWI), as reported by the Fairfax County Police Department (FCPD). While the count of total arrests for DWI decreased significantly from 2011 to 2012, the percentage of teenage incidents held steady at 8 percent.

For the area immediately surrounding Jefferson, the FCPD recorded 14 DWI arrests in 2012, one of which was a driver between 15 and 20 years of age. According to the Virginia Department of Motor Vehicles, Fairfax County led Virginia in drunk driving deaths from 2006-2010.

Teenage drinking while driving is part of a problem the U.S. Department of Transportation is trying to address across the country. Virginia is one of 33 states deemed ineffective in dealing with the problem. As a result, they have had to divert funds from general road and bridge construction to highway safety and drinking and driving programs.

Virginia ranks seventh highest in the amount of funds that needs to be diverted. North Carolina is number one.

Harrington believes that students are putting themselves in significant danger by choosing to drink and drive. “We have high school students killed every couple of years.”

When the suspicion of student alcohol-use emerges, the administration and the police can both investigate to make sure students were not driving at the same time. Under federal law, however, police and school officials are not allowed to investigate together.

Principal Evan Glazer says that when the administrators are presented with the suspicion of student alcohol-use, they prefer to refer the situation immediately to Harrington.

“If we don’t catch them in the act of drinking, it is nearly impossible to incriminate them,” Glazer said. “In the case of alcohol, I would prefer the police deal with it because they have access to breathalyzers.”

Coming to school under the influence of alcohol can be especially dangerous for students due to the detrimental effects of alcohol on the brain.

One study published in the journal Psychology of Addicted Behaviors found that heavy drinking correlates with shorter attention spans among boys. The effect is due to damaged tissue that results from drinking.

In girls, the study found poor spatial functioning, a quality which can be especially imperative at Jefferson because of its association with mathematics and engineering.

“The part of the teenage brain that is fully developed is the limbic system, which deals with emotions and impulses,” psychology teacher Jo-Ann Muir said.  “Sometimes the emotional part overrides the part that thinks things out, and that is when we have teens making poor decisions.”

It doesn’t take a large dose of alcohol to have such negative impacts.  According to the Centers for Disease Control and Prevention (CDC), a standard alcoholic drink contains 0.6 ounces of pure alcohol. The CDC also states that those participating in activities requiring “skill, coordination and alertness,” such as driving, should not be drinking.

Drivers Education teacher Heidi Smith believes that Virginia’s laws against drunk drivers are simply not strict enough and that punishments should be more severe.

“If the consequences were more harsh, there would be a lot less people driving while intoxicated,” Smith said.

In Virginia, the first offense for DWI is classified as a Class 1 misdemeanor, along with a minimum fine of $250 and potential jail time. The second offense requires jail time, and by the third offense, the driver will be guilty of a Class 6 felony.

Underage drinking, also a Class 1 misdemeanor, results in a fine of $500 to $2,500, community service, and up to 12 months in jail. However, once teenagers reach a blood alcohol concentration or 0.8, they are faced with the same consequences as adults.

Christopher Konschak, manager of the Virginia chapter of Mothers Against Drunk Driving (MADD), suggests another reason for the high numbers of underage drinking and driving incidents. The biggest issue, he says, is a failure to communicate a strong, consistent message to teenagers about the seriousness of alcohol and drugs.

“Some parents say no, and some say you can drink in my home,” he said. “We really need to get one message being sent, and that starts at home, drinking alcohol is not okay until you are 21.”

Because of this inconsistency, MADD and FCPS try to reach out to parents. MADD holds 30-minute training sessions for parents, and schools work through the Parents for Safe Teen Driving program.

In order to be eligible for a driver’s license, each student must attend a Parents for Safe Teen Driving session with their parents where Drivers Education teachers go over the dangers on the road.

“The session was a bit long, but it gave us the necessary information about driving regulations,” sophomore Jacopo Gliozzi said. “But it really emphasized texting and driving. Drinking and driving wasn’t the main focus.”

Because an hour-long presentation may not be enough to communicate a complete message, Smith also includes a unit on drinking and driving in her class for students.

“After 25 years of teaching, I’ve learned not to bark at them and how to make it more of a conversation,” she said. In addition, Smith opts for crash test videos instead of relying on blood and gore to help her students understand.

“The students can put themselves in those situations,” she said. “From the moment the kids walk into my class, they understand that they own their driving record.”

Some students, though they find classes and presentations are educational, do not believe they are an effective means of prevention against careless behavior among teenagers.

“There are some people I know who drink,” sophomore Adrian Robertson said. “But I don’t think it matters what you do, if they’re going to do it in the first place, it’s going to be hard to change that.”

“The problem of drinking and driving needs to be addressed in a different way,” senior Nadia Rentia said. “It’s not that people are ignorant; it’s the peer pressure.”

While teens may not intend to drive under the influence of alcohol, commuting back home from parties where alcohol is present emerges as an issue. Word from a variety of sources suggests a new trend in party habits, “darties,” or day-time parties. “Darties” allow teenagers to take advantage of the time when parents are away at work.

“I’ve been asked to drink, but after saying no once, I wasn’t pressured again,” Le Floch said. “I feel like the chances of getting caught are too much to make it worthwhile.

Until this year, Jefferson also had a Students Against Destructive Decisions (SADD) club. Because most of the members graduated last year, the club is currently non-existent.

However, previous officers admit that even when the club was alive, it was not very active.

“There was some drinking and drug use at TJ, but it wasn’t super prevalent, and what was going on was really well-concealed,” former SADD president Emily Crowe said.

“The officers, including myself, didn’t care enough about the club and its mission, a feeling which probably stemmed partly from the relative absence of drinking and drug use at TJ.”

Students who do feel passionate about teenage drinking and drug abuse, though, have found alternative methods of working against such issues.

Senior Saniya Suri joined The Safe Community Coalition after her freshman year. As a member of the Youth Council, she goes from school to school to talk to students about the dangers of alcohol and other drugs.

“As teenagers, we think we’re invincible, and it’s hard to tell other teenagers, ‘don’t do this,’” she said.

Still, she focuses on getting the facts out there and helping students understand her message.

“I do have friends who ‘experiment’ sometimes, but we think, at least they don’t party every weekend. And it’s sad that that’s what we have come to.” she said. “Drinking is so ingrained in our culture and society. It’s going to take a lot to change that.”

(This article originally appeared in the April 12, 2013 print edition).