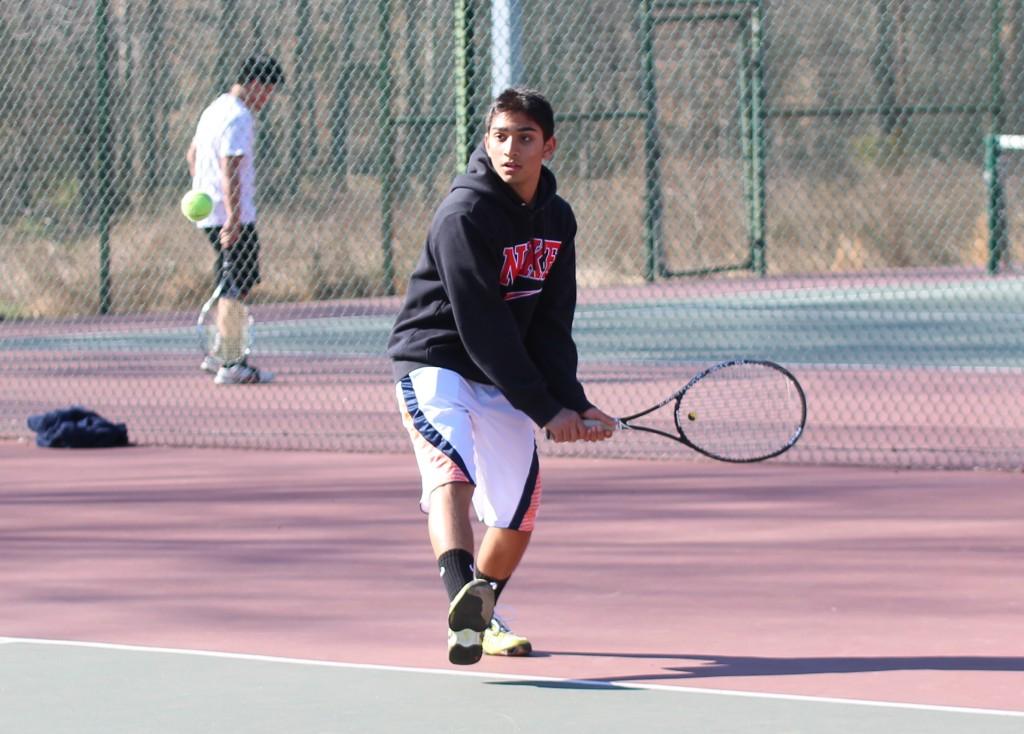 Freshman Abishek Bhargava prepares for a backhand during a practice match on April 2 at Wakefield Park.

Having pulled off the impressive feat of qualifying for Regionals the past several seasons in the row as well as currently holding an impressive undefeated record of 10-0, it is safe to say that the Colonials boys’ tennis team is formidable.

With the return of their several top seniors, including No. 1 senior Chris Vrabel and No. 6 senior Ian Lin, and the addition of a surprisingly large number of strong freshmen, the team has been performing very well into their season, even capturing victories over their long-time rivals, Langley and McLean high schools.

“This year we are excited to have senior Chris Vrabel back at No. 1 singles and doubles. He is the game changer for us,” Coach John Myers said. “Last year, we couldn’t beat McLean and this year, we were able to eke out a 5-4 win over the team that replaced us as Liberty District Champions last year.”

In addition, unlike last year, where there were only four freshmen, this year, the team welcomes 10 freshmen. Two freshmen, Mark Prettyman and Nikhil Ramacahandran, are ranked as No. 3 and 4 on the team, respectively.

“One great thing about having 10 freshmen on the team is that we are always pushing the upperclassmen to become better because we are very motivated and high school tennis is a new experience for us,” Prettyman said. “This helps the whole team get better.”

“We’ve had no problems winning the Liberty District and the Northern Region, but when it came to states, we were always affected by poor conditioning,” junior Julian Nguyen said. “But this year, because we have been eating more, we will be healthy and ready for the challenges that are ahead of us.”

The team’s ultimate goals this season are to continue an undefeated record and qualify for States, as well as beat rival schools.

“Given the incredibly talent and depth our team has, I think we have a very good chance at capturing the state title, something unheard to many players, as Deep Run has captured this titled three years consecutively,” Ramachandran said. “I’m excited for the rest of the season, and it’s great to see than we are still, and hopefully will be, undefeated.