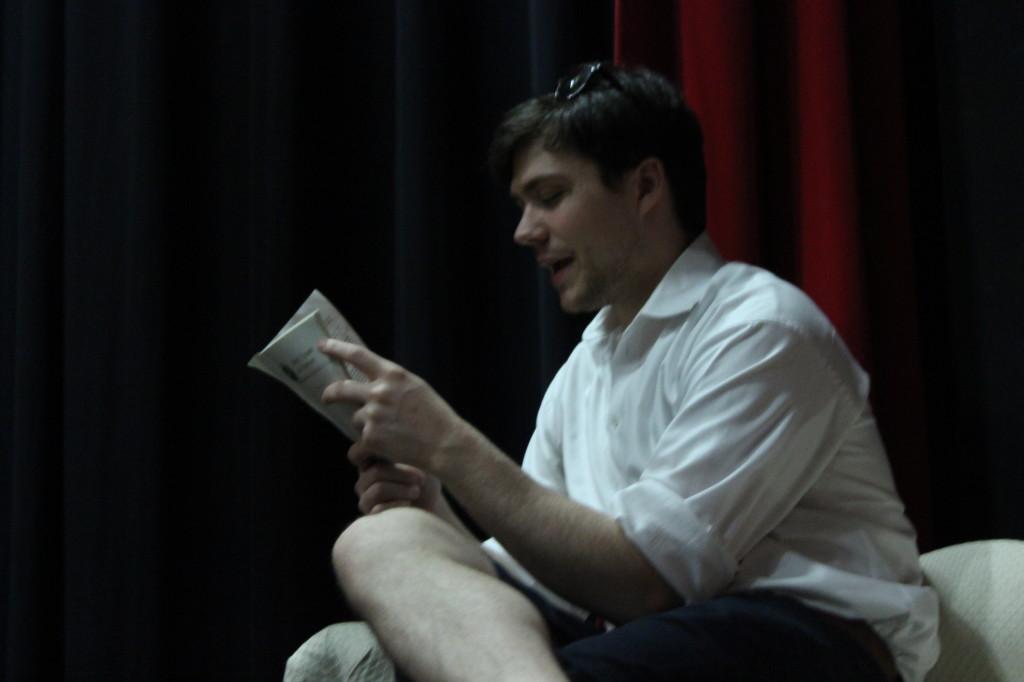 Guest director Zach Roberts reads from the script during a rehearsal.

TJ Drama will bring Nancy Gilsenan’s play, “Don’t Count on Forever,” to the Jefferson stage on April 19 and 20. Set in the 1980’s, “Don’t Count on Forever” tells the story of 17-year-old Lisa, played by senior Emily Kelly, as she deals with her parents’ divorce at home as well as being editor-in-chief of an eccentric yearbook staff at school.

“It’s not a famous or significant play, but it has a lot of relatable characters,” guest director Zach Roberts said, “so it’s good to do it in a high school setting.”

The play is remarkable for its style, based on the acting theories of late actress Uta Hagen, and was the reason why it was chosen by Roberts. He hopes that students will learn good acting techniques in the process. This is the first play he has directed for TJ Drama.

“It’s a realistic piece where there’s not a lot of heightened style,” Roberts said. “It’s based on things people actually say.”

In addition, unlike past productions, costumes are not rented but brought in from thrift shops and the costume room, or even created by the students themselves.

“I will be making some shirts and legwarmers and possibly other costumes depending on what I can use from the costume room and what I can buy,” said junior Liesl Jaeger, who is in charge of costume design. “My goal is to have each character wear a different costume for each scene by keeping the same basic elements, but changing a shirt or adding accessories to show how time is elapsing.”

In fact, many in the cast also had a hand in bringing in or making props. Junior Adam Friedman, who is charge of props, used and painted the containers of flypaper to recreate film canisters that are not easily accessible anymore.

“We had a lot of fun collecting 80’s memorabilia,” junior Ben Andre said. “Hopefully, the added realism will help benefit the production of our show.”

This show will be seen and reviewed by over 50 student critics as a part of the National Capital Area Cappies program, which honors high school performers and theater departments. Tickets to see “Don’t Count on Forever” will be sold at the door for students at $5 and $10 for everyone else.