Murphy nominated as Support Employee of the Year 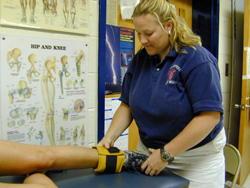 Athletic trainer Heather Murphy has been recognized for her hard work and commitment to her job, by being nominated as one of the eight finalists for the Support Employee of the Year Award.

Every year, Fairfax County Public Schools (FCPS) searches for a support employee who demonstrates leadership and fosters cooperative relationships within their school. Murphy is the first athletic trainer to be nominated for the award.

At the beginning of the year, Director of Student Activities Shawn DeRose encouraged Murphy to fill out paperwork to apply for the award. He felt as though Murphy would be the perfect candidate. Principal Evan Glazer, two parents and DeRose all sent in letters of recommendation to FCPS to nominate Murphy.

“It’s been a great honor to be the first Athletic Trainer nominated for this award. We started paperwork as far back as the fall, but it has all been worth it,” Murphy said.

The winner of the award will be announced on May 29.