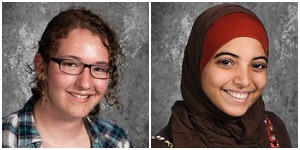 Juniors Emma Hastings and Anwar Omeish and sophomore Pooja Chandrashekar are Scholastic Writing Awards gold medalists. Omeish also earned the Creativity & Citizenship Scholarship and the American Voices Medal for her personal essay, “I Found Him in The Ballot Box.”

In addition to being honored locally on March 21, they will be honored at Carnegie Hall in New York on May 31.

“I actually first found out about my award without even realizing it. I was turning in a math test and my teacher, Mrs. McConnaughey, said ‘congratulations,’ and I thought she was talking about finishing the test,” Hastings said. “When my astro teacher, Ms. Hennig, said the same thing, I asked what she was talking about and she showed me the award announcements.”

Hastings received a gold medal for her short story entitled “The Sweet Scent Of Gamma-Aminobutyric Acid,” which was about a girl whose younger sister has epilepsy and gets a seizure alert dog. This is her second year as a gold medalist.

Chandrashekar wrote a personal essay that assessed the evolution of her connection to her Indian heritage. She titled it “The Pink Sari.”

“I was really excited and speechless when I found out I medaled,” Chandrashekar said. “It is just such an incredible honor.”