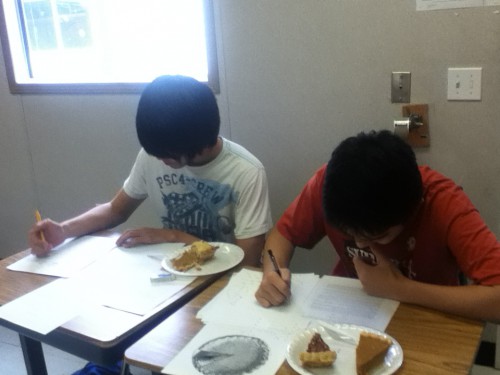 Instead of celebrating with a “gut-style” math round with questions given in order of difficulty, the Varsity Math Team officers decided to change it up this year for the team’s annual Pi Day celebration. On March 13, the team held a special activity for its members during eighth period.

Students were given a problem set to complete. When each finished one of the problems, they would get it checked by the Math Team officers. If their answer was correct, they were awarded with five points and a slice of a circular picture. If they could guess what the picture was, they were awarded an additional 15 points.

“We decided to change it up to add an element of fun” historian and junior Jennifer Yin said. “We chose a picture that would be hard to guess, but this way you can win by guessing the picture and not doing as well on the problems.”

The point of this contest was to see who could end up with the most points. While everyone was given a piece of pie for participation, there was an incentive to win. The first and second place winners would go home with an entire pie to themselves.

“Coming here today meant we get pie, and we get to do math problems. It’s like a win-win situation” sophomore Tim Cha said.