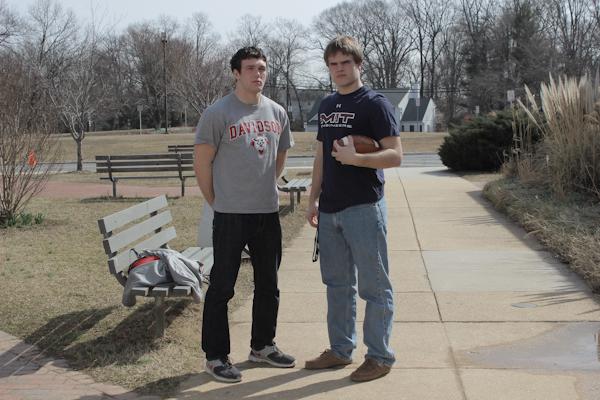 As second semester begins, many seniors have committed to colleges. While these students have achieved their academic dreams, some seniors will also have the chance to play sports in college.

Most of the senior athletes began the task of selecting the right school as early as freshman year by communicating with potential coaches.

Senior Emory Ruscus, who was recruited to Princeton University’s crew team, attracted the attention of coaches after rowing with the Junior National Team in his junior year. Similarly, in her junior year, senior Ceci Vollbrecht drew interest from varsity coaches at the National Field Hockey Festival. Coaches first contacted senior Chris Vrabel in ninth grade based on his rankings in United States Tennis Association tournaments.

The seniors informed their coaches of their athletics and academics throughout junior year.

“Recordings of races were important, along with grades, test scores and information regarding my experience,” senior Sarah Khatry, who will be a coxswain for Dartmouth’s crew team, said.

Over the summer, the seniors narrowed their options by visiting their top choices. After making their decisions, most of the athletes applied early in November with backing from their future coaches.

“Columbia was the only school able to provide me with the perfect combination of academics, athletics and likelihood of acceptance,” Madani said.

The athletes committed when they sent their applications, the exceptions being seniors Jack Brown and Patrick O’Connor, who committed to play football for the Massachusetts Institute of Technology (MIT) and Davidson College on Feb. 6, National Signing Day.

Several of those who applied to Ivy League schools received “Likely Letters” soon after submitting their applications.

On the other hand, senior Julia Arthur, who will row for the United States Naval Academy, was not officially recruited because her application was deemed strong enough already.

“Coaches can only recruit a certain number of applicants,” Arthur said. “Because I wasn’t technically recruited, the coach was able to put his OK behind another recruit.”

Senior James Bollinger, who is planning to row for Harvard University, was not recruited, but the coach sent the admissions office a recommendation.

“The difference is, if you’re recruited, you basically have a 100 percent guarantee of getting in, but a recommendation only raises your chances by a few percentage points,” Bollinger said.

The seniors had several reasons to continue their sports at the collegiate level. Senior Zach Ho, who will play squash for Columbia, believes that “playing a varsity sport in college helps students manage their time better as well as create a strong base of friends.”

Vrabel, who was recruited to Cornell University’s tennis team, chose to pursue tennis not only because of his love for the sport, but also because “recruitment made the admissions process a whole lot easier.”

In their final decisions, the athletes strived for an optimal balance between academics and athletics. Senior Reese Frerichs was “glad that where he wanted to go academically lined up with where he could swim” when he was admitted to the Washington University of St. Louis.

Brown made a tougher decision, but he stated that academics were his top priority.

“I had interest from schools that play at a higher division than MIT, but I did not want to waste all my hard work at TJ attending a school that I could have easily gotten into with mediocre grades,” Brown clarified.

On the other hand, senior Emily Bartlett only looked at schools with Division I rowing teams, although she did not compromise academics when she was recruited to Dartmouth Unviersity.

As graduation approaches, the seniors look back fondly on their high school careers, but they also look forward fulfilling their dreams at the collegiate level.

“Now, after four years of crew, I am able to apply my developed work ethic to anything in my life,” Ruscus said. “As with all sports at any level, I will continue to learn valuable lifelong skills that can only be learned in competitive environments.”