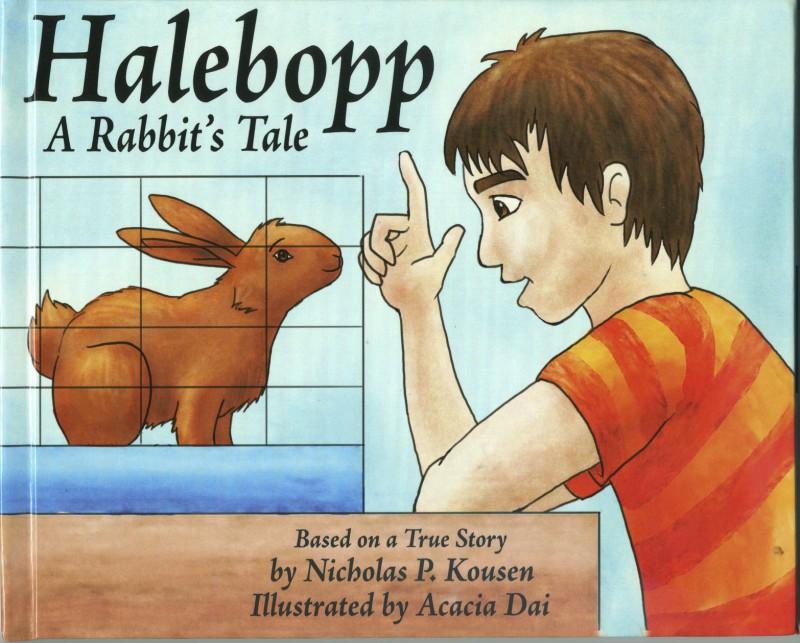 Class of 2012 graduate Nick Kousen and senior Acacia Dai recently published their book, “Halebopp: A Rabbit’s Tale” after five years in the making.

Written by Kousen and illustrated by Dai, “Halebopp: A Rabbit’s Tale” is a heartwarming children’s story of how a lonely, mistreated rabbit that found a home with a loving boy. It is based on the true story of Kousen’s relationship with Halebopp, his pet rabbit.

Kousen initially wrote the story in his freshman year as a personal narrative writing assignment for his English class. When his teacher, Jennifer Seavey, read Kousen’s first draft, she felt the story needed to be told from the point of view of the rabbit. She directed him to “Watership Down” by Richard Adams.

The second draft morphed into a compelling tale.

“I knew it was a great story for kids when I read it,” Seavey said.  “All it needed was the right illustrator.”

Kousen found his illustrator the next year when Seavey introduced him to Dai. Now a freshman in Seavey’s class, Dai stood out for her artistic talents. However, Kousen and Dai did not start seriously collaborating on the book until another year passed when Kousen was a junior and Dai a sophomore.

“I’ve always wanted to be able to publish a book,” Dai said. “To illustrate a book has always been a dream of mine, too.”

Another teacher who served as a guide for Kousen and Dai was Bettie Stegall, a former English teacher at Jefferson. Stegall proved to have an invaluable wealth of knowledge.  Not only did she assist the students in editing their manuscript, but she also introduced Dai to publishing software such as Adobe InDesign.

Kousen, who is currently a freshman at the College of William and Mary, has had a demanding schedule this year, so Dai stepped up to the task of searching for a publisher. After much consideration, the students selected RJ Communications LLC, an independent printing company.

“We found that self-publishing was much faster and much easier, although it would be up to us to market our book,” Dai said.

When their efforts finally culminated in the publication of “Halebopp: A Rabbit’s Tale” on Feb. 8, Kousen was extremely pleased with the results, although he did acknowledge that he had doubts along the way.

“Needless to say, I was always happy with how the story grew and evolved from a simple writing assignment,” Kousen said. “The wait to get it this far has certainly been worth it, and I am glad I was able to work with Acacia on this project.”

Even though the publication process is now over, Kousen admits that “there are still many obstacles the book continues to face, such as making it more widely known and available.”

According to Dai, the students will try to introduce their book to local bookstores such as Barnes & Noble. Dai hopes to do some readings at bookstores and libraries as well.