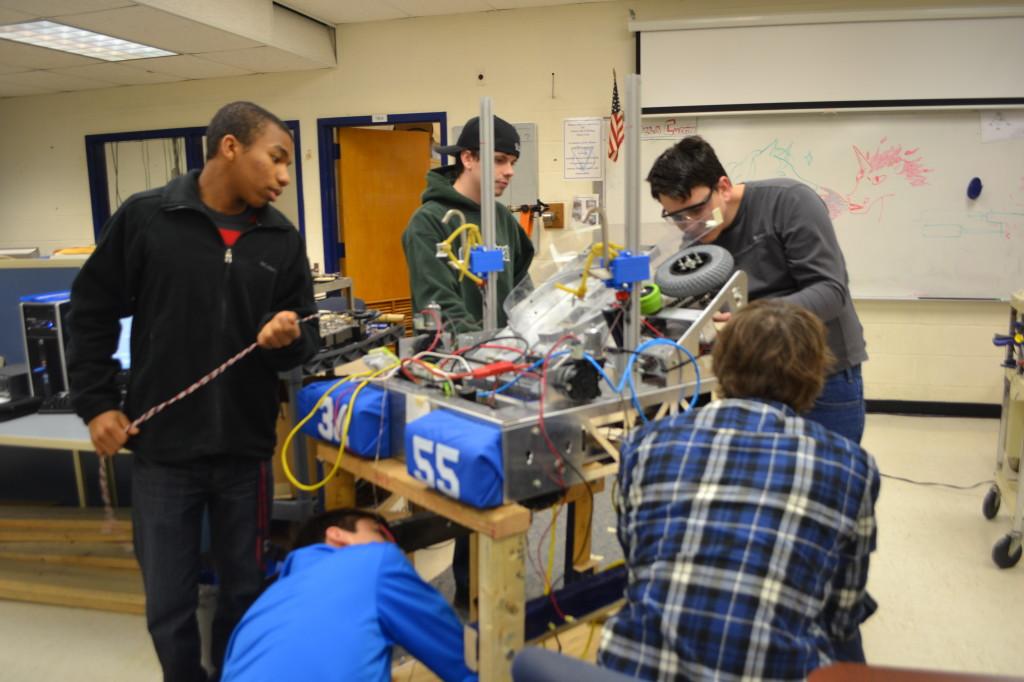 Members of the FIRST Robotics team work on putting the finishing touches on their robot.

Every Saturday, students interested in robotics and prototyping huddle together over computers and robot parts in preparation for the FIRST Robotics competition in April.

FIRST Robotics teams all over the nation have six weeks to build their robots. Feb. 19 was the team’s last day to work on their robot.  Since the beginning of January, the students have worked during class periods, after school twice a week, and Saturdays from 9 a.m. to 3 p.m. on the robot.

“This year we prioritized better. We used more standard designs, so we were able to focus on the specific parts of the game, and that helped us,” Automation and Robotics Research lab director Charles Dela Cuesta said. “I think we will perform better this year, as long as we finish.”

Dela Cuesta and Prototyping and Engineering Materials Research lab director Clinton Behling assisted the students throughout the process, taking care of logistics while helping with the actual project. In addition, engineers from The Boeing Company serve as mentors for the team.

The team’s goal is to create and design a robot that will succeed in playing the game, ULTIMATE ASCENT.  In the game, the robots collect Frisbees and throw them in various goals to score points. The teams can also garner points by climbing a pyramid.

Jefferson’s team hopes their robot will be able to climb to a certain height, but the members have decided not to reach for the top of the pyramid.

“It’s incredibly complex to climb to the top of the pyramid,” senior Bobby Fontana said. “While we had some great designs, we did not have the time to implement them.”