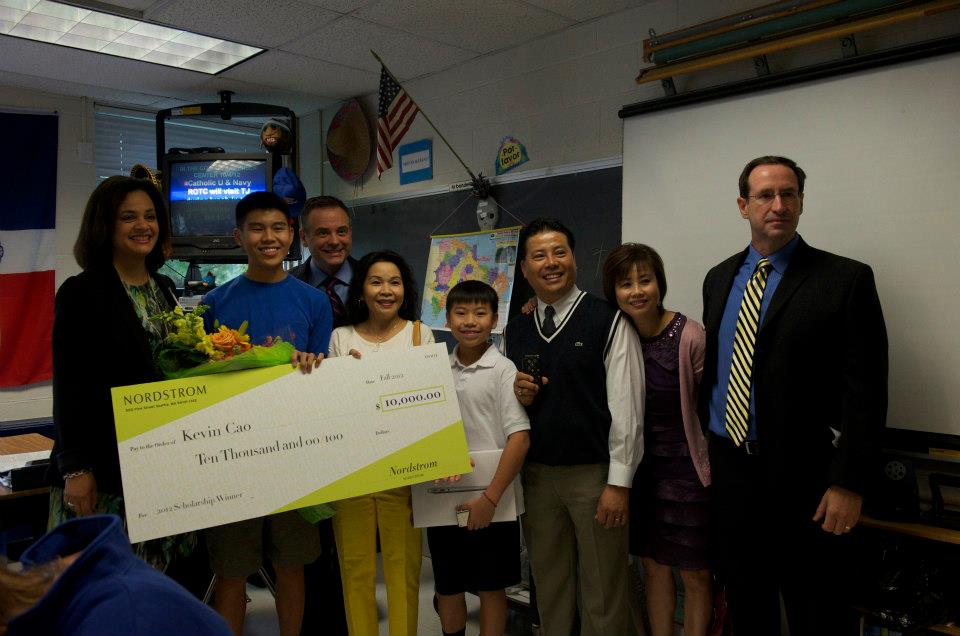 Senior Kevin Cao was surprised during class with a $10,000 scholarship from Nordstrom earlier this year.

Since his junior year, Cao has won over $20,000 in scholarship money. Now that college applications have been submitted, seniors are starting the search for scholarships. Cao is ahead of the game.

Cao has been proactive about the process by using the College-Career Center (CCC)’s database of scholarships.

“I come from a very humble background. My mom works as an office receptionist and works very hard to support me and my little brother,” Cao said.

Cao’s most recent win came with the FCPS In Hope Freedom Rings Scholarship. Cao was one of the two winners in Fairfax County and was awarded $10,000.

Cao was also awarded $10,000 from the Nordstrom 104U Scholarship in his junior year and has been granted the Student Peace Award of Fairfax, winning him $100 and a formal awards ceremony.

He is one of Jefferson’s two nominees for the U.Va. Jefferson Scholars program and was recently named an Echols Scholar. Cao is also Jefferson’s nominee and a
finalist for the Harry F. Byrd, Jr. Leadership Award.

Cao owes much of his success to his experience with the organization he co-founded in his freshman year, Growth and Inspiration through Volunteering and Education (GIVE). The non-profit currently has 11 free tutoring centers throughout Northern Virginia.

“GIVE has taught me invaluable lessons on leadership and philanthropy, and I try to let that shine in my   applications,” Cao said.

(This article originally appeared in the January 25, 2013 print edition.)