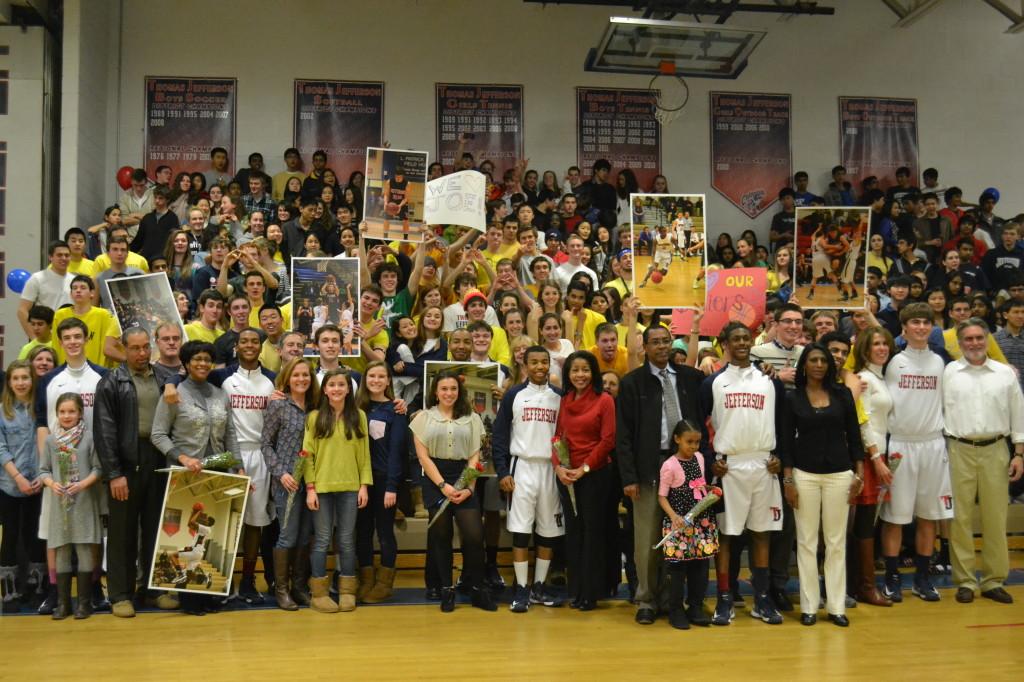 Jefferson families and the Monticello Maniacs celebrate the senior players on the team.

The bleachers bled different shades of yellow as Jefferson’s basketball fans, the Monticello Maniacs, held up bananas and posters to cheer on the varsity basketball team in their last home game of the season on Feb. 8.

The Colonials, celebrating their Senior Night, fell in a disappointing loss to the Marshall Statesmen with a final score of 38-55.

Prior to the start of the game, the senior boys on the team walked out to the court with their families with cheering from the bleachers. Many of their friends and Monticello Maniacs held up posters and wore T-shirts to support the players.

For most of the game, the points seemed to go back and forth between the Colonials and the Statesmen. At half time, Marshall led 25-20, while by the end of third quarter, the score had widened to Marshall winning 37-32.

The Statesmen seemed to break away during the fourth quarter due to a few unfortunate interceptions and fast breaks.

Despite the loss, the Jefferson players considered the night a victory, with tremendous support from their fans and a great Senior Night celebration.

“It was a tough loss,” said senior Sebastian Lerner, who attended the event, “but the way in which the seniors were recognized and celebrated for all of their hard work and dedication to the program was inspirational.”