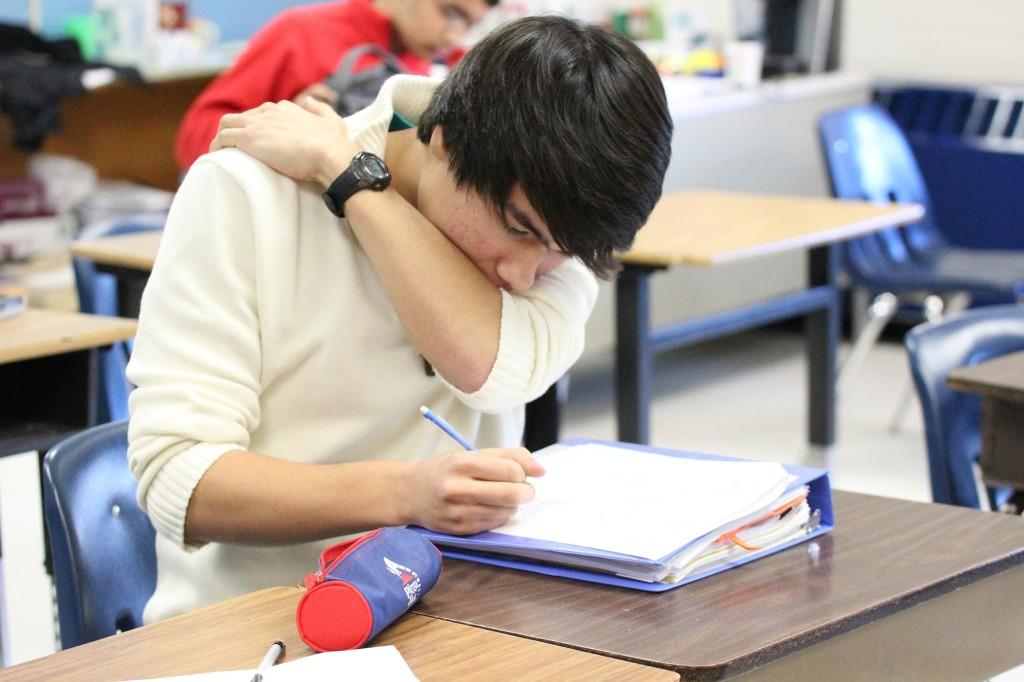 Junior Ben André makes sure to cough into his arm to prevent transmission of viruses.

As medical professionals predicted, the flu season seems to have peaked in January, and the number of empty seats in classrooms increased  just in time for semester exams and midterms.

According to the Center for Disease Control and Prevention (CDC), this year’s flu season is worse than average, with 48 states in the country affected by widespread influenza activity. It was just a matter of time before students were affected as well.

“Last time I had the flu was in fourth grade, but this is the worst flu I’ve ever had,” Banerjee said. “I’ve had colds before and normally, I could deal with them, but I found it harder dealing with this one.”

She now faces the daunting task of catching up on late assignments as well as preparing for a math midterm, AP Macroeconomics final and a missed AP Biology quarter exam.

“It is really difficult to make everything up,” she said. “The hardest part is knowing what to make up, especially since it is midterms week.”

In order to recover, Banerjee rested at home and took antiviral medicine to help fight the flu. She was able to alleviate her fever to return to school.

Many other students have been afflicted with the seasonal disease as well. The number of student absences spikes around the flu season, according to Kathleen Young, attendance officer.

“I’ve seen the numbers of absences go up last week and this week,” she said.

Kirstin Stamper, the school health aide, believes it is important for students to wash their hands and cover their coughs to prevent further transmission.

“Washing your hands throughout the day is one of the easiest ways to help protect yourself against colds, germs and viruses,” she said.