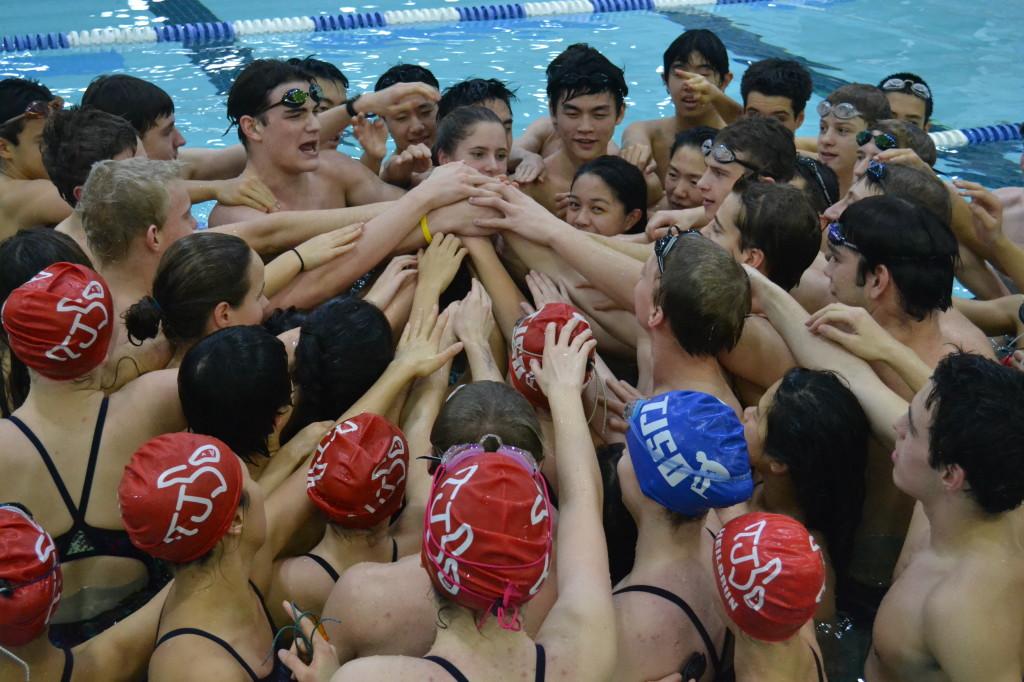 The Jefferson boys’ team set a goal at the beginning of the dual meet season for their performance in the Liberty District: to go undefeated for the entire year and claim the Liberty District crown. On Jan. 18, they achieved half of that goal by claiming a decisive 220-94 victory over the McLean Highlanders.

Fresh off of an exciting win against Madison High School the week before, the Jefferson boys came into the meet with their goal in sight. Jefferson went 1-2 in many of the boys’ relays, including the 200-meter medley relay with an explosive performance from sophomore Andrew Seliskar, delivering a key butterfly leg in the “B” relay.

Several wins on the boys’ side were attributed to sophomores Luke Thorsell and Seliskar, junior Miles Oakley and senior captain Reese Frerichs.

“We wanted to go undefeated,” junior Will Ashe said. “Last year, we got fairly close, but the Madison boys’ team edged us out in the meet, so we took that defeat into this season and used it as motivation to work hard.”

The girls did not fare as well as they fell to the Highlanders with a final score of 139-176. While the Jefferson girls had consistent swims, the McLean girls won almost every girls’ event, sometimes going 1-2 in the events.

Sophomore Carrie Heilbrun proved to be the standout swimmer on the girls’ side with her performances in the 50-yard and 100-yard freestyle events, as well as anchoring the 200-yard and 400-yard freestyle relays. Freshman Sophia Moses, sophomore Taylor Quinn and senior captain Sarah Liu also had great swims.

“We are going to have to swim our best in order to beat the Madison boys for our second time this season,” Ashe said. “Madison is going to be fired up from their loss, but we have beaten them once, and we can do it again.”

The Liberty District Swimming and Diving Tournament will be held from Jan. 25-26 at Audrey Moore RECenter.