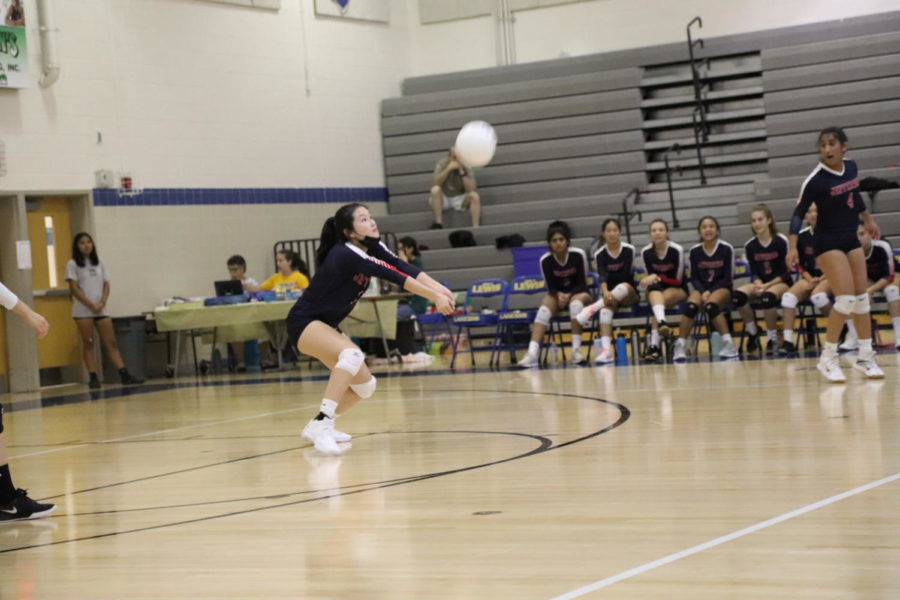 Senior Rachael Sim goes down to bump the ball in Jefferson volleyball's first win of the season. "Although we had a couple of losses prior to this game, before our game on 8/29 we did our best to keep a positive and focused mindset. We were optimistic and had faith in our combined abilities to win, but we kept in mind that we had to put out our best effort," junior Jessica Chen said

The Jefferson girl’s varsity volleyball team defeated the John Lewis High School Lancers 3-0 to notch their first victory of the season on Aug. 29. After the first two sets ended 25-19 and 25-22 in favor of the Colonials, the final set required a lengthy deuce to decide the victor, eventually finishing 33-31.

Despite playing away, the team focused on intangible aspects of the game that they felt would benefit them, especially in such an environment.

In addition to focusing on communication and working on fundamental skills, the team stated that placing emphasis on mindset was a determining factor in their victory.

“When a game is close and the stakes are high, it’s really easy to get in our minds. We did an amazing job in keeping our energy high and not giving up, as well as encouraging each other regardless of the outcome,” Chen said.

Regardless of the win, the team still sees places that they could improve on for the future.

“In the future, we plan on working on being an even more cohesive team while also improving our own skills. We’re also super excited to improve on our free ball plays,” Chen said.

“Overall, we feel really optimistic about our season together. Every single player on our team is amazing, both skill-wise and as a team player. We still have a long season ahead of us, and we’re going to make the most out of every play we get together,” Chen said. “Our team and I’s goals can be summed up as keep steamrolling. No matter what, it’s important to think of each play as a brand new chance to start over again. We only have a couple months together as a team, but I think we will achieve a lot together.”