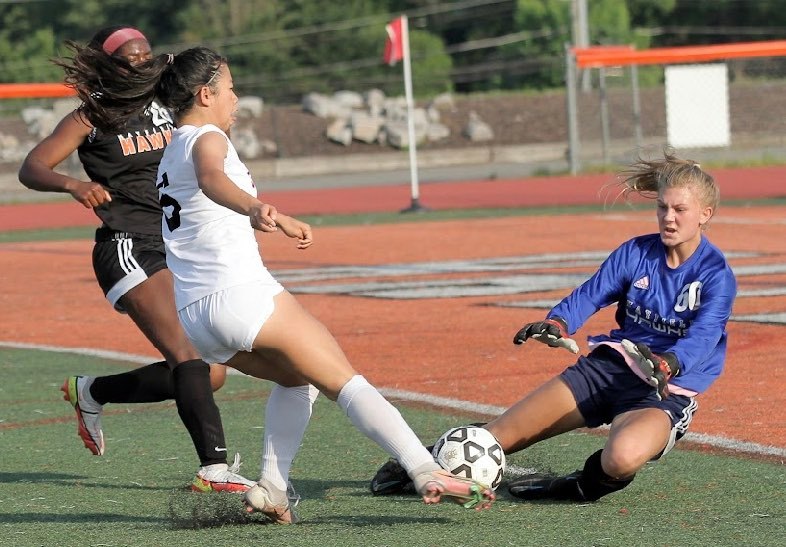 After a strong fight, Jefferson’s varsity girls soccer team was not able to win against Alexandria City High School. “We ended up losing in penalty kicks which was painful for us because we knew we were doing really well,” freshman Anna Chau said, #6, pictured above.

On May 31, 2022, the Jefferson varsity girls soccer team competed in the region quarterfinals against Alexandria City High School (ACHS). The game was tied 0 – 0 and then continued in penalty kicks, which led to Jefferson’s loss.

In the first 45 minutes of the game, Jefferson played defense, protecting their goal from the opposing team.

“We were more defensive in the first half but in the second half we were definitely on offense more and looking to get that breakthrough goal,” freshman Josie Clayton said,  #20.

Throughout the 90 minutes, Jefferson had opportunities to score, however they were not able to.

“The team had many chances, but unfortunately we couldn’t get the ball in the net which led us to double overtime and the shootout,” Chau said.

Although ACHS’ players were fighting hard, their goalie was a big advantage.

“One thing I realized from the team was how incredible their goalkeeper was. In the 10 years I’ve played, I’ve never played against a goalkeeper with that kind of skill,” Chau said.

Other teammates on Jefferson’s team also agreed that the goalie was a huge obstacle they had to overcome.

“The AC goalkeeper was insane. She had an incredible save on one of Anna’s shots after she had dribbled through the entire ACHS defensive line and shot into the bottom corner, but  somehow the goalie got down to make a reaction save,” Clayton said. “She was definitely one of the reasons they won the game.”

The ball was in Jefferson’s control for most of the game, but not having enough time to shoot the ball into the net was the issue.

“We had possession of the ball for longer as well as many shots but it just came down to the amount of time we had to score,” Chau said. “We got pretty unlucky when it came to shooting, but we got incredibly close a numerous amount of times.”

The team worked together cooperatively, all of them playing an important role.

“Our backline was solid the whole game as our outside backs stepped up and really shut down (ACHS) attackers,” Clayton said. “Our centers were amazing, not to mention our amazing midfielders who controlled the middle for us, and not letting the opposing team play through the middle.”

After ending the 90 minutes of game plus overtime, the teams moved on to penalty shoot-outs.

We had Josie Clayton, me, Ashley Lee, Sydney Belt and Andrea Silva taking the kicks for the shootout,” Chau said.

Despite a close game, the team came up just short in the end.

“The AC goalkeeper made some great saves on us,” Clayton said.

In conclusion, although Jefferson suffered a loss, they worked their hardest, and tried their best, learning from their experience.

“We did everything we possibly could and left it all on the field,” Clayton said.