Swim and Dive has exciting meet against Madison 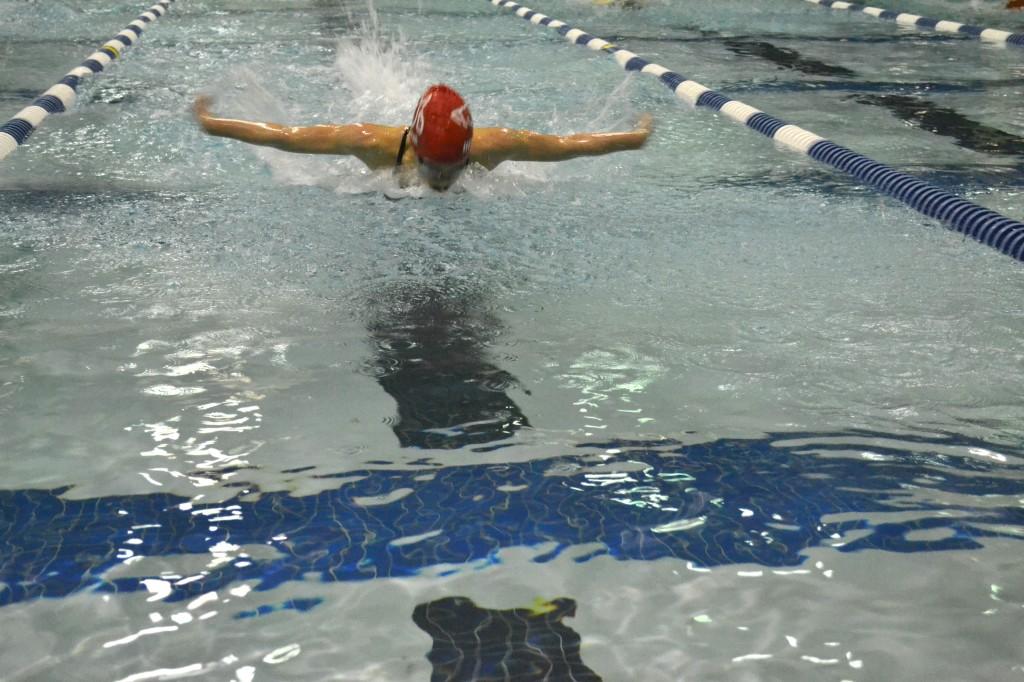 The Madison Warhawks have dominated boys’ swimming in the Liberty District by for the past few years, having won three consecutive district titles and being undefeated for nearly five seasons. However, in a highly anticipated showdown on Friday, the Jefferson boys proved to be the team to beat in the Liberty District, with the final score coming down to 162-153.

The Jefferson boys’ and girls’ teams had been preparing for the meet against Madison for the entire season, and athletes from both teams swam personal bests.

Prior to team cheers, the swimmers received an exciting pre-meet speech from the senior captains. Head coach Ian Handerhan also delivered a fiery speech, emphasizing that though scoring on paper showed that both the boys and girls would fall, the night’s results would come down to what the athletes would do in the pool.

“Ian demanded our best, and I think we met his challenge. It was, no question, a team win,” junior Miles Oakley said. “The captains gave a really cool pre-meet speech about the team being a family, and while you can’t deny the performances of individual swimmers, this win happened because the team as a whole stepped up to the plate.”

Sophomore Andrew Seliskar, a member of the U.S. junior national team, led the boys’ team with two decisive wins in the 500-yard freestyle and the 100-yard breaststroke, as well as swimming a fast butterfly leg in the 200-yard medley relay and anchoring the 400-yard freestyle relay. Oakley, senior captain Reese Frerichs and freshman Luke Thorsell also had convincing wins.

On the girls’ side, the score came down to 146-169. Sophomore Carrie Heilbrun won both her events in the 50-yard freestyle and the 100-yard butterfly, posting a high school career best in the butterfly event. Sophomore Taylor Quinn and senior captain Sarah Liu also assisted in raising the girls’ overall score.

The Jefferson girls’ diving proved to be helpful for the overall score, with sophomore Callan Monette and freshman Valentina Lohr going 1-2 in the girls’ diving event. On the boys’ diving side, the Madison Warhawks swept the first through fourth place finishes.

“We should go undefeated for the regular season, but Madison will be very difficult to beat at Districts and beyond. Even so, it showed us we could step it up and take down an opponent we were supposed to lose to,” Oakley said. “It’s definitely a huge milestone for the team and this year’s seniors.”

The final dual meet of the season will be against McLean High School on Jan. 18.