‘All of Us Villains’: Great potential, unremarkable execution 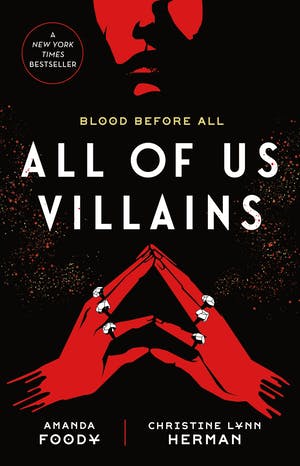 With a vast amount of novels in the Young Adult fantasy, it’s becoming harder and harder to find uniquely compelling books in this genre full of generic plots and characters. “All of Us Villains,” written by Amanda Foody and Christine Herman, is promising enough –– the novel sets itself in a modern fantasy world in which seven teenagers fight to the death for powerful magic in an organized tournament. However, for all of its potential to be the next great fantasy, “All of Us Villains” falls just a bit short in execution. I was very intrigued by the premise, but in the end, this novel became just another tolerable Young Adult fantasy.

The novel attempts to be a dark, ambitious tale that blurs the line between right and wrong, opening with a cast of self-interested characters willing to do anything for glory –– but these characters’ developments quickly abandon blurry morality as the focus of the story. I’m all for character development –– but not such swift changes in just the second chapter describing the character. Alistair, for example, made his mark as an unashamedly villainous main character, but by his next chapter, every amoral and unapologetic characteristic the authors have built up is squashed into a misunderstood boy stereotype. However, I do applaud the authors for how they use four points of view to craft four three-dimensional characters with altogether different circumstances, motivations and development. Some characters come from families with glorious reputations, while others are scorned; some characters are motivated by renown, others by survival. While these characters may not have stayed true to their villainous origins, the multiple points of view really illustrate the complexity of human nature, especially when placed in such an unethical situation as fighting other people to the death. Still, the multiple points of view may be a pitfall of the novel. With four points of view, each character’s development had to be rushed in order to complete four stories in four hundred pages. The sudden character changes in part can be attributed to this. The lack of focus on one character made it harder to get through the novel as well –– it was hard to stay interested in all four points of view and even harder to connect to all four characters.

The world-building as well is disappointingly vague. Seeing as the tournament is set isolated from the rest of the town, the choice not to delve too deep into the technicalities of the world is understandable. However, I was not impressed by the lack of detail on the magic system. Magic really takes center stage in this novel –– it distinguishes the novel from other death tournaments like the Hunger Games. Even the most basic details –– the difference between “high magick” and “common magick,” for instance –– are ignored, and the references to the characters using magic are vague and unexplained.

I have mixed feelings about the writing style: on one hand, the descriptions are very well done. The authors have a knack for choosing just the right words to paint vivid imagery in your mind (which comes in handy with the gruesome deaths), but they had a tendency to tell rather than show in their action scenes –– for example, their idea of showing pain was simply to write that the character screamed. I was also not a fan of the dialogue; it was, at many times, clumsy and unnatural.

This isn’t to say the novel is unsalvageable; the plot tries its best to make up for the novel’s other lacking characteristics. Moving past the slow beginning, the plot really twists all of its elements to make the story as unpredictable as possible. Going beyond the concept of teenagers killing each other with magic, the unethical tournament is also brought into the limelight for the first time, calling in government interference, public attention, and media coverage. Foody and Herman follow the golden rule of novel writing rather well –– whatever can go wrong, must go wrong.

Overall, Foody and Herman have succeeded in writing a thoroughly mediocre Young Adult fantasy novel. The plot was really the only thing pulling me through this novel, something that I don’t find enough in a book –– and a lot of the grim atmosphere expected from “All of Us Villains” does not meet expectations. For YA fantasy addicts, it doesn’t hurt to try this novel out. Still, I’d recommend trying out instead the ever-popular “Six of Crows”, “The Cruel Prince” or “To Kill a Kingdom” to satisfy your villainous needs.