After years of training, two Jefferson fencers earn the opportunity to compete internationally 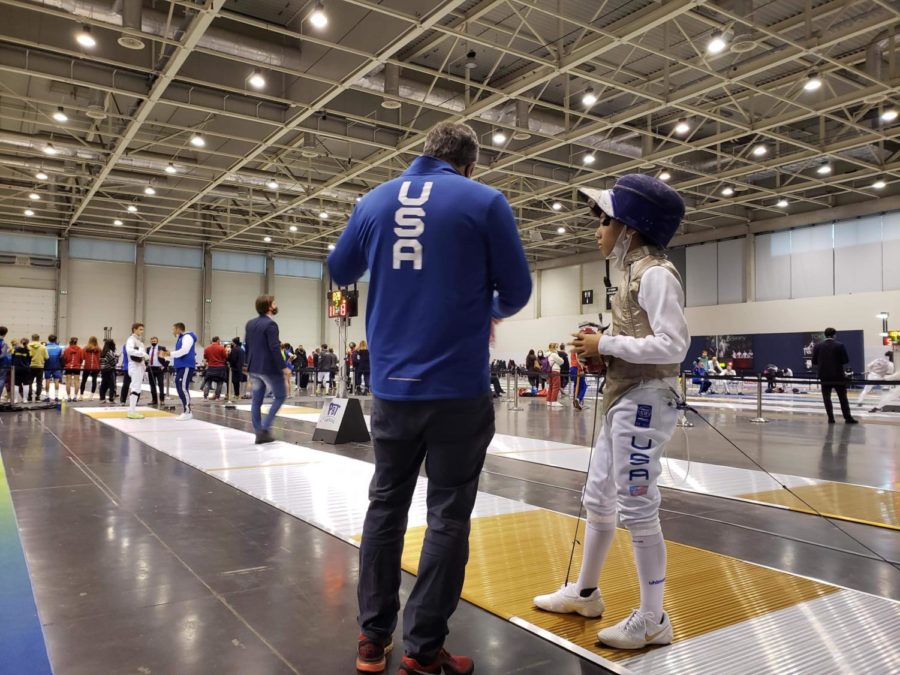 Freshman Aidan Lee talks to fencing coach Greg Massialas during the individual competition portion of his tournament. Lee competed in the Cadet Individual and Team Men’s Foil Event in Budapest, Hungary from Nov. 13-14. “In individual, I got second after the first round. I was winning 13 to 11. I just messed up and I lost,” Lee said.

En-garde. Prêts? Allez! And with that, the competitors are off, weapons in hand, ready to strike at the opportune moment. In fencing, the objective is to strike the opponent before they can strike you; sophomore Ajit Sivakumar and freshman  Aidan Lee have mastered this routine, conquering opponents in tournaments throughout the United States.

As nationally ranked fencers, both Lee and Sivakumar recently got the opportunity to take their talents overseas. Lee’s tournament in Budapest, Hungary on Nov. 13-14 and Sivakumar’s in Grenoble, France on Nov. 20-21 mark the first time either have traveled abroad for fencing. Both fencers compete in the cadet age group, ages 14 to 17.

“It’s my first international tournament. I’ve been fencing with  people who are older than me for a while,” Lee, 14, said.

Lee began fencing when he was eight years old, while Sivakumar took up the sport a bit more recently.

“I was initially inspired [to start fencing] after watching the Olympics in 2016.  I didn’t know much about it either, because fencing was pretty small compared to a lot of other sports,” Sivakumar said.

As is with many major achievements, the opportunity to represent the country in an international tournament takes hard work, dedication, and maybe a little luck. In the rankings leading up to the tournaments, Lee was ranked 21st in the nation, while Sivakumar was 14th.

“First, they [ask] the top 20 people in the nation. Then, if someone doesn’t want to go, they ask the next person. I was 21st, so because someone didn’t want to go, I got to go,” Lee said.

The two have been preparing for a long time, and in the days leading up to the tournaments, neither has slowed down their preparations.

“I train after school from 7 to 9p.m pretty much every day except Tuesday and Thursday, with a lot of conditioning and physical training,” Lee said.

To properly prepare for a tournament, fencers have to account for many aspects of the sport and get in optimal condition.

“We do drills with bladework or footwork, or practice fencing each other. The individual lesson is where you can really work on technique and strategy. If I recently lost in a tournament, I would watch the tape and figure out what I did wrong,” Sivakumar said.

Both athletes train regularly with or without an upcoming tournament, but preparing mentally is specifically valuable for tournaments.

“Before a tournament, I practice and do drills for situations that I might be in. Like if the score was tied, what would I do to win? Or if I was losing by three points, what can I do to make sure I don’t lose more points myself?” Sivakumar said.

Although Lee and Sivakumar have competed in fencing tournaments across the country, international tournaments are new territory for them.

“At first, I just thought ‘Oh, I did what I had to do to get there,’ but now it’s like ‘Wow, well I’m traveling internationally,’” Sivakumar said before the competition. “Generally, when I go to a tournament, I know what to expect, but I’m not sure what to think about this one.”