A brand new “You” 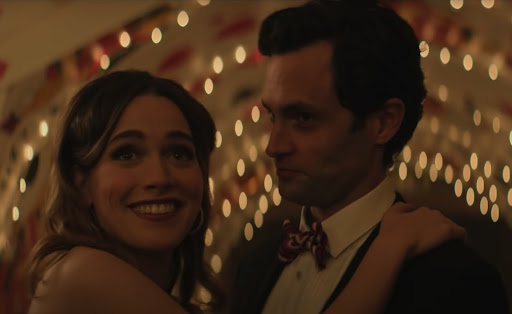 In this third season of the hit show You, the married couple Love Quinn and Joe Goldberg attend a gala at the library.

Joe Goldberg is a man who would do anything for someone he loves—including murder. He grew up with a rather disturbing childhood, and his adulthood doesn’t get much better. He progresses through his life with one romantic obsession after another, getting rid of anyone he decides is a “bad influence” on their lives. In this third season, things heat up as he moves to a new place and meets new people. Released on Oct. 15, this season is available to watch on Netflix.

Starting off with season 1, Joe gets his second obsession with a girl named Guinevere Beck. He met her in the library he worked at, and decided she wasn’t like everyone else. She was an aspiring writer, and Joe wanted to help her accomplish this by murdering a couple of her closest friends like any normal person would. Unfortunately, when Beck found out what had been going on, he had to lock her up in his book cage under the library. At the end of the season, Beck got her book released, and it skyrocketed—maybe because she had recently passed away. Meanwhile, Joe decided to move to sunny Los Angeles, where he would go on to get a job at “Erewhon,” a healthy, juice-crazed supermarket.

While at Erewhon, Joe bumps into his third obsession of the series: Love Quinn. Love and her brother, Forty, are also workers there, and her parents own the supermarket. They got together after a little time had passed, and Joe returned to his old stalking habits when a girl, Ellie, in his apartment complex got into some trouble with a guy, Henderson, who took advantage of younger girls. He took it upon himself to kill Henderson, but things got tricky when he realized he’d just gotten rid of a small celebrity.

After the whole Henderson ordeal, Joe had to deal with a ghost from his past—his first obsession, Candace Stone. She had gotten into a relationship with Forty to keep a close eye on Joe. While the first season seemed to imply that Joe had gotten rid of Candace for good, the second one brought her back from the dead—quite literally, seeing that Joe had buried her alive. It seemed a little forced to bring her back from the dead like that, but she played a good antagonist.

A little while later, Ellie’s older sister, Delilah, finds out that Joe has been killing people, so he has no choice but to lock her up in his book cage. During her time spent in that cage, Love finds her, but that doesn’t guarantee Delilah’s safety. Joe comes back to the cage one day to find Delilah’s dead body. Viewers are left stunned as they follow Joe’s point of view while he tries to recollect bits and pieces of his memory from his drugged-up night spent at Forty’s place.

When Joe returns to the cage once more, he’s faced with a vengeful Candace who locks him in with Delilah’s body. Then, Love walks in and Joe admits to having killed people. Love rushes out of the storage room, and pukes in a garbage bin. Candace chases after her to comfort her, but is met with a life-ending slit in her throat. Love runs back to the storage room to tell Joe the shell-shocking truth—she’s the one who killed Delilah. A horrified Joe somehow manages to convince Love to open the door, where he almost ends her life—until Love told him she was pregnant. Forty gets wind of Joe’s sociopathic tendencies, and holds him at gunpoint in Erewhon for a last face-off. Joe accepts defeat and is about to meet his demise before a police officer shows up and shoots Forty, killing him and devastating Love.

Flash forward to the third season set in suburban Madre Linda, California, the third season of You stole the top spot of Netflix’s top ten shows in US Today. At the end of season two, audience members found out that Love Quinn is as insane as Joe is, meaning she kills people who are “bad” for her family. In this new season, Joe immediately forms a new obsession within his first couple days of moving. He now knows that Love is a murderer, and he feels betrayed and unsafe—as most people would feel if they married a killer. They go through some rough times in their marriage since both of them aren’t exactly faithful to each other.

Despite being in a new, uber-secure place, Love and Joe’s killer instincts haven’t gone down as much as they should’ve. As they struggle through grief from the death of Forty (Love’s brother), overcome obstacles in their marriage, and take care of their son, they navigate what it means to be a parent and live in a neighborhood with security cameras.

In comparison to the previous season, this one managed to be better—in spite of its many plot holes. The main character, Joe Goldberg, is a charismatic murderer who loves a little too much. If not for his humorous monologue, he would be easier to hate—and the show would have lots of silence coming from its main character. All in all, it was a great addition to the show that had a rather fiery conclusion.