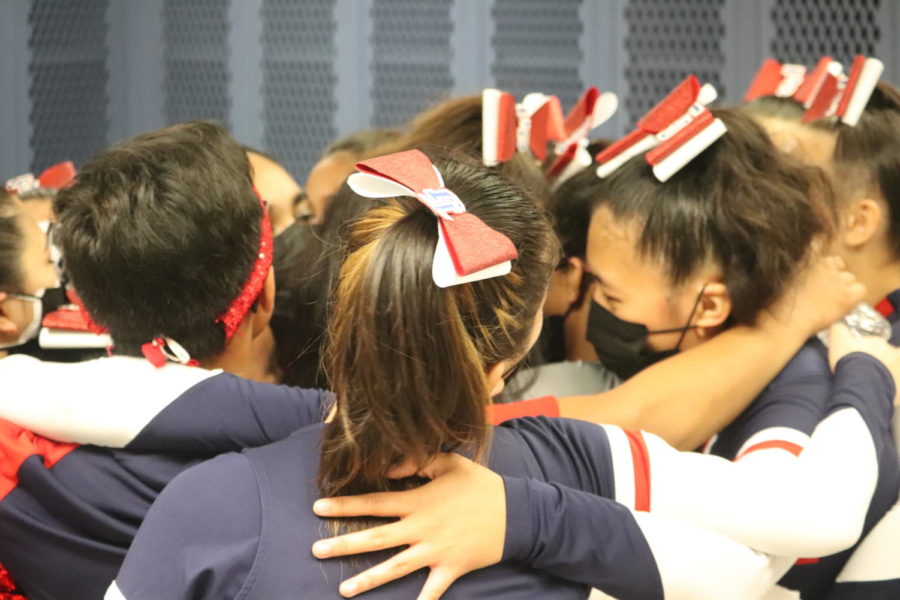 The Jefferson cheer teams celebrates the triumphant season. “I am really proud of the team this year,” captain and flyer Grace Guan said.

The Jefferson cheer season ended on Oct. 20, with the team placing 13th overall after competing in the district semifinals and finals at Hayfield Secondary School, as well as regionals at South County High School. After a rocky start to the short season, the cheer team was able to rise through the ranks with a very successful final performance.

The Jefferson cheer team first competed in the district semifinals at Hayfield Secondary School on Oct. 12 with a slightly modified routine.

“Before the competition, we didn’t feel too great because we had to make a lot of substitutions,” captain and flyer Grace Guan said. “The stunt groups weren’t able to hit all of the stunts we originally had [in practice], so we had to modify them a lot.”

The modified routine wasn’t the only reason for nerves before the first competition, though. Pamela Ahn, one of the cheer coaches, knew they were all going to feel out of place due to not having previous interactions with the other cheer teams at football games, like most of the other schools have.

“When TJ sports teams, and in particular the cheer team, is in competition with our district schools, we collectively feel like fish out of water,” Ahn said. “I woke up that morning just so nervous—on pins and needles—for my cheer team because they’ve been working so hard. But I knew going in that they were going [to] feel out of place because this is the first time meeting the other teams.”

The routine at the district semifinals included a basic cheer section with signs, cheers, and stunts, as well as a routine alongside music, which lasted for about three minutes. After the performance, 19 points were deducted for a multitude of reasons, including failed stunts.

“Our own squad [was] not happy with their performance,” Ahn said. “There were some technical deductions, and some stunts weren’t successful. Collectively, they are very hard critics of themselves. [Because] they got a 19 point deduction, they just did not walk away happy.”

However, after the district semifinals, the team set their focus on improving for their second competition, the district finals, on Oct. 16.

“A couple of our stunts fell [at district semifinals], and that was really the turning point,” Guan said. “It made us realize that we really had to push through and get it done and work super hard.”

The coaches also put in more work towards reducing the stress and nerves that came along with important competitions by focusing on having as much fun as possible.

“To get them to relax [between the district semifinals and finals], we actually had a silly dance portion of practice to get everyone to loosen up. At that point, they already knew the routine, so all we did as coaches was help them loosen up,” Ahn said.

The district final competition, also held at Hayfield, was more successful, with only eight points deducted, leading the cheer team to place seventh.

“They only had an eight point deduction, meaning they had a drastic improvement from the semifinals,” Ahn said. “I think just ramping each other up, having your spirits lifted, singing silly songs, and doing locker rituals really helps.”

Before the final competition of the season, the regionals, the high energy levels in the locker room were palpable due to it being the cheer team’s last performance for the rest of the year.

“They were so hyped up; it was so cute,” Ahn said. “The coaches do this ritual where we give a rose to each team member and they select another person on the team and say something sentimental about them. Then, the coaches select two roses and recognize two people on the squad who really deserve some recognition.”

Regionals were held at South County High School on Oct. 20. The cheer team performed phenomenally, and ended with an almost no deductions, in stark contrast to their first competition.

“We came out of it with almost a zero deduction routine. There was only one point taken from us, which means it was almost flawless,” Ahn said. “We hit the routine.”

The Jefferson cheer team placed 13th in regionals, ranking above Annandale High School and Lewis High School. Overall, the cheer team improved in leaps and bounds throughout the season, all while having a great time and becoming a family.

“I am so proud of them,” Ahn said. “Our squad members are inspirational people to me. They just come together and it’s like a small family unit. I’m just really, really, so proud of them.”