Jefferson football on a Thursday 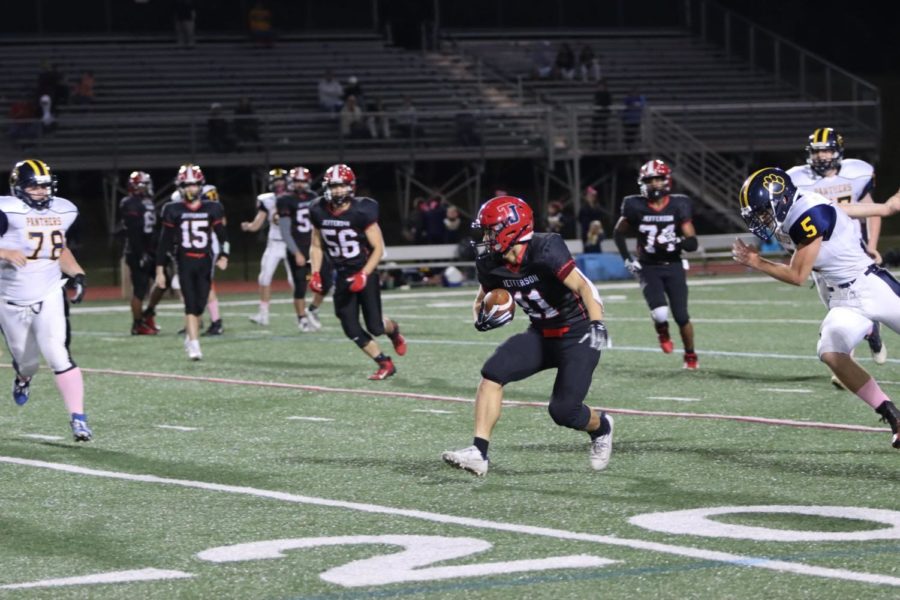 Junior running back Justin Yoo carries the ball across the 20 yard line. The varsity football game originally scheduled for this Friday, October 22, was moved to October 21 at 7 p.m. due to a referee shortage. “I was really excited that we ended the season on a good note,” Yoo said, “but [it was] also sad that it was our last game with the seniors.”

The game was originally scheduled for Friday the 22, but was moved a day earlier due to a referee shortage.

“There are not enough referees to officiate all the area football games on Friday nights,” Assistant Coach Michael Auerbach said.

He further explained that the date change was due to a shortage of referees: the association that provides high schools with referees has had fewer available staff than previous seasons.

“The Officials’ Association that provides referees for Northern Region football games has had a drop in numbers. As a result, multiple games each week are moved to Thursday or Saturday.  This was the first time for us, but many other teams in the area have had to do the same thing,” Auerbach said.

The date change wasn’t a simple transition for the players. Practices originally scheduled for Thursday were pushed earlier in the week to make space for the new game time.

For Jefferson, the schedule change meant the loss of a practice day, but for the away team, there were additional challenges.

“It was probably tougher on our opponent than us, since they had to arrange for transportation from Rappahannock County on a school night.  [For TJ], our practice schedules were [accelerated]  since there is a specific way we structure each practice to prepare for a Friday game,” Auerbach said.

Since the game was moved forward, the team had one less day to prepare for their final game of the season, and for some, their last high school football game. The team, however, did not see this jump in schedule as a major setback.

“I don’t think it affected our pre-game preparation or in-game performance at all.  It may have had a small impact post-game, when we were all feeling great about the win, but realized we still had to come back to school the next morning.  A football game is a very mentally and physically exhausting thing, and it is not super-fun to have to get up early the next morning and go to school,” Auerbach said.

While the date swap didn’t affect the players, the crowds seemed to have been impacted. Aarya Vijayaraghavan, a sophomore running back and safety, noticed that the crowd was a little thinner on Thursday.

“Many people couldn’t come out and show their support for the seniors, but it felt great to finish [the season strong], and the seniors went out with a win,” Vijayaraghavan said.

Junior linebacker and running back Justin Yoo agreed that the Thursday game was awkward. The team originally had practices scheduled for Thursday, which meant game night shifted their schedule.

“It was a bit weird playing on a Thursday, since we had less practice [time] to prepare for the game,” Yoo said.

While Jefferson football finished the season with a record of 6-2 on an uncharacteristic day, they started their season with a bang, earning a 4-0 record for the first time since it was named a science and technology school in 1985.

“It feels great to be part of the team that set the record. Everyone on the team worked really hard off season and gave it their all during games,” Yoo said.

Junior quarterback Gavin Hatalosky is also proud of the team’s effort, and the seniors who gave it their all for their last game.

“I’m happy the seniors got to end their career with a season like this, [even if we] are sleep deprived [for classes],” Hatalosky said.

More important than the score, however, is the bond Hatalosky formed with his teammates.

“My favorite part of playing football is the friendships with my teammates. Most of the friends I’ve made playing have become my closest friends outside of football as well,” Hatalosky said.

Thursday’s win motivated Hatalosky to begin working for next year’s season. Next fall, he plans to continue to play for the varsity team.

“I’m pretty happy we closed off the season strong, it makes me motivated to work hard in the off season and create an even more historic season [for my senior year],” Hatalosky said.

Hatalosky is not the only one thinking about next year. Sophomore linebacker Punav Khetarpal sees next season’s games as an opportunity for school-wide bonding, and suggests that everyone should come to games.

“It’s a great experience to both join the team and [support them by] spectating,” Khetarpal said.

Thursday’s game was the last for many seniors on the team. To Coach Auerbach, their winning streak can be attributed to the hard work of the players and his coaches, with Thursday’s being no exception.

“The single best part [of Thursday’s game] was that, out of the five touchdowns we scored, four were by players who were scoring for the first time in their career,” Auerbach said. “It’s pretty awesome to watch a kid do something in a single moment they will remember their whole life, and to have played a role in making it happen.”