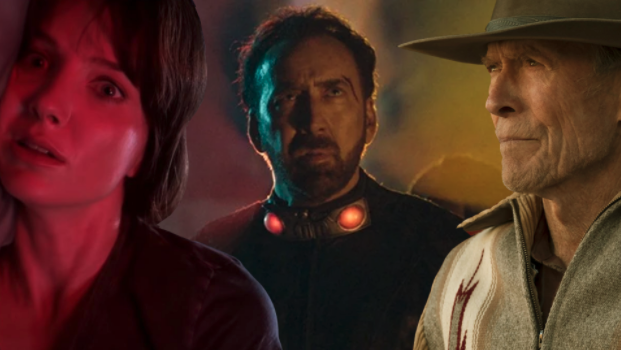 Annabelle Wallis (on the left), Nicolas Cage (in the center), and Clint Eastwood (on the right) share a common trait of starring in bad movies recently.

After years of anticipation, modern master of sci-fi Denis Villeneuve (director of “Arrival” (2016) and “Blade Runner 2049) has released his ultimate adaptation of “Dune” (2021) to universal critical acclaim… in the EU. Back in the States, we’re left with this slop: 3 bad movies from directors who should’ve done better.

“Cry Macho” asks a lot from its audience. While Clint Eastwood is 91 years old and long gone are his days where he could carry a film through sheer charisma, the film asks that you believe he can do exactly that. Eastwood’s character is supposed to simultaneously be the coolest and most competent person in the room at all times—even going so far as to have two separate women at least 40 years his junior attempt to seduce him—while also in the story trying to have a message about a cowboy past his prime. While in theory, I might admire the themes of “Cry Macho” (despite them having been made countless times before by more interesting filmmakers), it’s ultimately hindered by trying to have its cake and eat it too.

The film follows Mike Milo (Clint Eastwood), a former rodeo jockey who, as is heavily and obnoxiously exposited to us by his ex-boss Howard Polk, stopped riding after a disastrous accident. Milo is spurred to adventure when Polk tells him about his bastard son in Mexico, who he wishes to have returned back home to Polk’s ranch. Milo accepts the offer and starts his journey, where he finds Polk’s son Rafo (played astonishingly poorly by Eduardo Minett). Since Eastwood is the coolest guy in the world, apparently, Rafo immediately accepts his offer to come to Texas, which is complicated by his mother’s band of gangsters attempting to make sure that doesn’t happen.

This is where the dissonance comes to a head, because for as much as the film tries to insist Milo is past his prime (much like Eastwood clearly is), it comes off as shallow. Every single person who questions Milo is proven wrong, he woos all the women, and even bests much younger men in physical combat. If “Cry Macho” actually fulfilled its premise’s promise of a tender western where Milo has to accept his advanced age and better himself, I wouldn’t have these complaints. Instead what we get is a sad plea to the world that Clint Eastwood is still just as cool as he was in the 1960s which is made worse by one of the lousiest endings of the year. Just watch “The Good, the Bad, and the Ugly” (1968), which manages to simultaneously be cooler and more heartfelt than “Cry Macho” wishes it could be at the same time.

If there was ever an actor-director duo that should’ve broken the world if it were to ever come to fruition, it would’ve been that of Nicolas Cage and director Sion Sono. Surely, if these two were to ever join forces, Cage’s bombastic acting style would meld with Sono’s equally baffling directorial voice into an alchemic tour de force of bizarre delight. This is all to say that Sono’s new trip “Prisoners of the Ghostland” had all the makings of a camp masterpiece. Unfortunately, it is not.

What ultimately holds “Prisoners of the Ghostland” from reaching that legendary status is that it does not suitably utilize the talents of either Cage or Sono. Cage is perfectly capable of the highly stylized, melodramatic acting which would be right at home in a Sion Sono film (here is a perfect example), but his performance in this is far more reserved than it has any right to be. It’s the newest in a long line of worryingly subdued performances from Cage, where I feel like he’s trying to emulate Clint Eastwood’s characters from his spaghetti western days, but it just comes off like he doesn’t want to be on set. Sono’s directing is similarly understated. Normally, his s

tyle of extreme melodrama and gore combined with frenetic camerawork is captivating—like in his best film “Love Exposure” (2008)—but like Cage, he’s become stale.

While Sono’s recent heart attack might be able to explain this film’s lack of commitment to its east-meets-west premise, it ultimately makes for a strangely uncanny experience. “Prisoners of the Ghostland” isn’t strange enough to let its stupidity become an asset like in “Malignant”, but it’s not well made enough for it to be enjoyed as a normal movie. Miss it. But speaking of “Malignant”…

I mean it as no slight against the man when I say that James Wan is perhaps the least subtle filmmaker alive. After his “Aquaman” (2018) film made over a billion dollars, Wan has been afforded seemingly endless creative freedom, which he has used to make the most confusing movie of the year. That’s not to say that the events of “Malignant” are difficult to follow, but rather that its conception is so baffling that it’s hard to even tell whether or not it’s actually bad, even days after seeing it. If this film was made by anyone else, its sheer stupidity would immediately put it in the bargain bin of schlocky B horror movies, but Wan’s clear skill at creating an effective image elevates it to the point where the margins between bad and good get fuzzier than they ought to be.

“Malignant” centers around Madison Mitchell, a run-of-the-mill horror heroine who starts experiencing visions after a comically cruel domestic encounter. These visions come to her in the dead of night, exposing her to a string of grisly murders which are all connected to a mysterious scene at the beginning of the film. Each beat in the story is conveyed with all the nuance and intelligence of a toddler playing with action figures, and for the first 70 minutes or so, it’s about as dull as being forced to watch that. For one, the twist—which I won’t reveal here—is about as obvious as a stab wound, which makes the mystery leading up to it interminably tedious, especially with each performance from the cast somehow being less convincing and more poorly written than the last. I don’t know if there’s a single actual character in this movie, rather there’s just a cast of horror tropes and quotes shambling around until someone manages to get killed.

With this kind of setup, it was a wonder when after the 70-minute mark, in a prison cell full of stereotypes, “Malignant” got really entertaining. Finally, Wan’s Giallo-inspired visual style and absurdly wide camera lenses became an asset when the film pulled all the stops and became a high-octane bloodbath. The action in the last act of the film is, while incredibly stupid, absurdly well made in a way that made me start to question whether or not this film was all an elaborately made joke. Was this film just a poorly conceived member of a long line of schlock, or was it actually an intricately constructed parody of that kind of film made at the expense of a room full of studio executives who decided to give Wan unlimited creative freedom? Ultimately, I think this film is pretty bad either way, but if that second option seems interesting to you, I’d wholeheartedly recommend it to you. Just have some friends to laugh at it with you. Available on HBO Max.