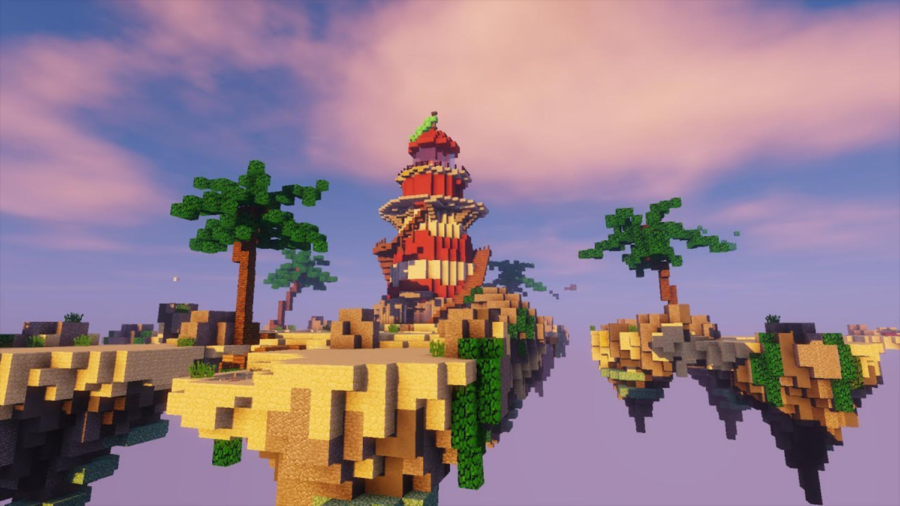 Bedwars, one of the most popular minigames of all time, was the main event of Jefferson’s Minecraft tournament. One of the maps where players battled it out for this year’s Bedwars tournament was the "floating sandy islands" shown above. This was the second-ever tournament as part of the homecoming festivities. “I’m kind of biased because I’m a Minecraft player, but Minecraft should definitely return to homecoming because it’s a fun experience for everyone,” freshman Kathy Guo said.

The junior and sophomore class tied for first place in the second-ever homecoming Minecraft tournament. Held on Sept. 18 and 22, the tournament included Survival Games and Bedwars.

These games tested skill, strategy, and teamwork as the teams competed to determine which class would be the ultimate Minecraft champions.

“In this Survival Games, there were 40 people, ten from each class fighting on a map of the Jefferson school building,” junior Deccan Maniam said. “The map was surrounded by a border that would eliminate you if you got too close and it happened to kill nearly everyone.” Maniam’s team participated in this game and also got first in the Bedwars tournament.

This year’s Survival Games was hosted on a custom server and map instead of renowned servers such as Hypixel.

“The Survival Games were pretty boring,” sophomore Sonny Chen said. “PvP [players versus player battle] was very hard as the server was running on two ticks per second. ” A low tps will result in a delay in combat strikes, map movement, and landscape glitches. Chen’s team got first place in the Survival Games.

Bedwars is a team elimination mode, but each team has a base containing a bed to defend. To win, a team has to destroy the other team’s bed and wipe them out. The finals ended on Sept. 22 with the juniors emerging victorious.

“The games were 40 percent strategy, 40 percent skill, and the rest all up to luck. In the first round, we were aggressive but then got rushed by the juniors,” freshman Guo said. “We knew for the next round that everyone was going to target the juniors because they won the last round, so we just stayed at our base and waited for the other teams to eliminate each other.”

All of the games for this year’s tournament were held by the Student Government Association, who experienced bumps along the road with event coordination.

“Bedwars was pretty smooth but they suddenly decided to change the rules for the game mode right before the tournament and did not tell us. Originally, we were supposed to have two classes fight each other at a time, but the new rule made all the classes end up fighting each other in a big battle,” freshman Guo said. “I still had fun playing as the new rule did not change the whole game.”

With the juniors and sophomores each winning a tournament, they ended up tied for first overall in the Minecraft games tally. This was just the second-ever Minecraft tournament in what people hope to be the beginning of a longstanding homecoming tradition.

“I think Minecraft should return to HOCO because it’s really popular and anyone can represent their class and play,” junior Maniam said. “Many people have it and tournaments are easy to hold on the Hypixel server.”