From the sidelines to the spotlight 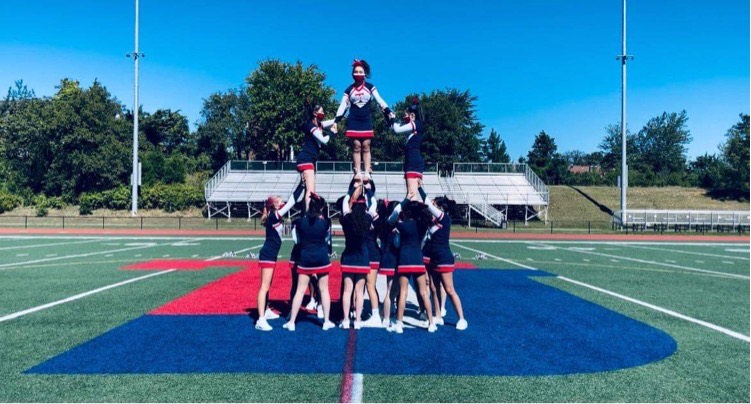 The TJHSST cheer team practices together on the football field. ”I think the community of people who are in cheer is really fun and laid back, and everyone’s super supportive,” senior Justine Chu said.

“Attack! Get tough! Make them shake in their knees! We’re the mighty Colonials, and we do as we please!”

If you have been to a Jefferson football game lately, you may have heard a chant like that during the game. That’s the Jefferson cheer team, a sport that has been going strong despite the pandemic.

However, COVID has created challenges for many sports, and cheerleading is no exception.

Luckily, sideline cheer has not experienced much change, due to the fact that cheerleaders are already spread out on the side of the field.

“For COVID, the only thing that’s really changed is we wear masks while cheering, so you can’t see our smiles,” Guan said.

Last year, during the pandemic, few freshmen participated. This year, though, sophomore and freshman interest has been high.

Chu encourages everyone who is interested in cheer to join the team, even if they have never done it before.

“A lot of the sports at TJ don’t need any experience to join. So if you have any interest, you should just go for it and you’ll probably find a community of people who are super nice,welcoming, and willing to teach you everything that you need to know in order to succeed in that sport, and [it will] add to your high school experience,” Chu said.

Guan also thinks that the community is what makes cheer special.

“Cheer has been my favorite activity so far at TJ because it’s just a family. It’s so welcoming, and everyone wants you to succeed,” Guan said. “You have so many inside jokes, it’s just such a fun place to be. You meet everyone, and then one week later, you’re all great friends.”