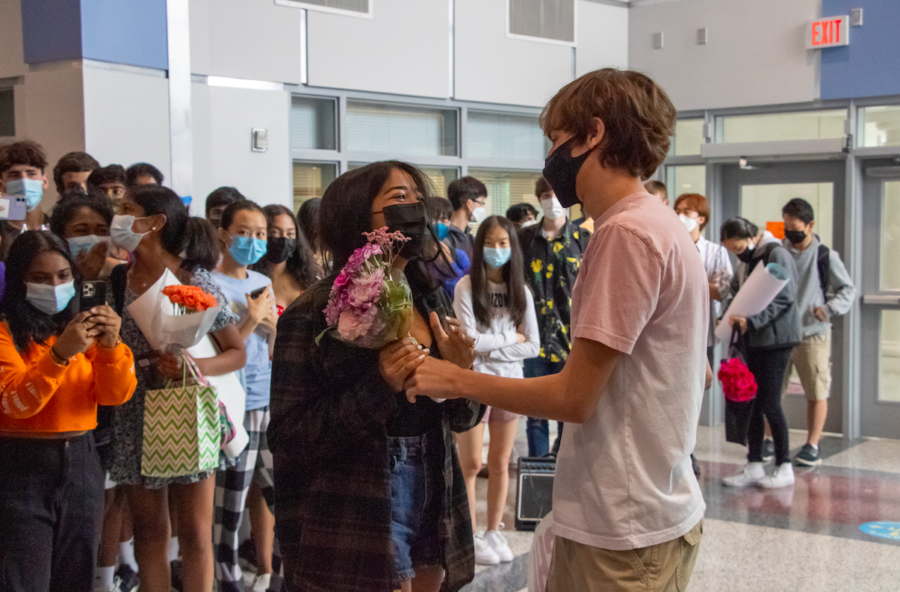 Enter Nobel Commons at noon and you’ll find a crowd of spectators surrounding people holding posters or performing a small skit. This can only mean one thing: Homecoming asking week is finally here. From Sept. 13 to 16, students asked their friends or dates to Homecoming.

From seeing people singing “What Makes You Beautiful” to performing a skit, watching a public asking is an event in itself. Even if the onlookers do not know the people asking personally, students cheer on their classmates regardless.

Howton prepared for his asking by first asking his upperclassmen friends what normally happens in an asking. He then took a couple days to come up with a pun for his sign. “Once I had the pun, I baked the cookies, made the sign and then bought flowers the next morning,” Howton said.

For those not involved in an asking, the week may not have been as enjoyable.

“I know that there are a lot of people that didn’t get asked that may feel sad when seeing others getting huge askings,” sophomore Grace Lee said.

Regardless, asking week can be exciting.

“It’s the best—it gives people an excuse to step out of their comfort zones and it pushes people to talk to those they were too scared to talk to in the past,” sophomore Yasmin Kudrati-Plummer said.

“I just felt really special when I was asked. Nothing like that has ever really happened to me,” Kudrati-Plummer said.

However, with the public event of asking comes an overwhelming amount of nerves and pressure.

“A bunch of people are staring at you and there’s all this pressure to respond a certain way,” Kudrati-Plummer said. “Obviously I wanted to say yes from the start, but I didn’t know what came next, and that was the hard part.”

Asking week is unique to Jefferson, and the supportive community behind it is just as special.

“Since [Jefferson is] such a supportive community, I think there’s no judgement [when] asking publicly,” junior Daniel Kim said. “One of [my] biggest fears was embarrassing myself in front of a crowd, but that wasn’t the case. People were cheering.”