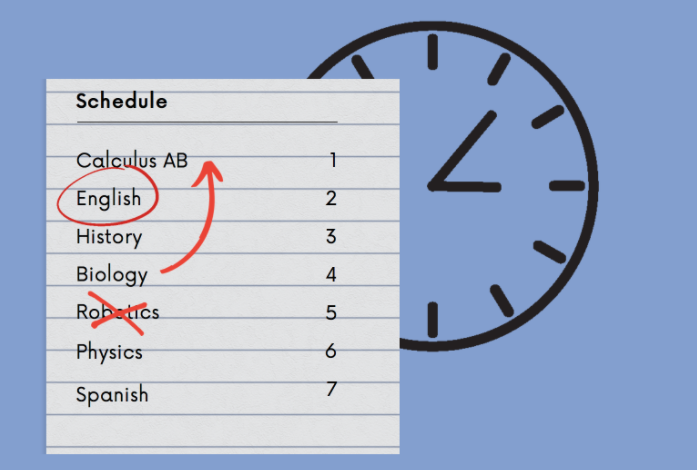 With only a month to complete schedules before school began, counselors prioritized core classes. “Our first look was seniors. Do you have your graduation requirements? If you're not in the senior research lab, if you don't have [the] English class that you need, that's a problem,” principal Dr. Bonitatibus said.

Jefferson students experienced many scheduling issues with the start of this new, in-person school year.

When schedules were released on Thursday, August 19, some students found themselves in classes they did not choose.

“I was not put into any of the electives that I chose on my course request, and I was put into electives that were totally outside my interests,” junior James Henry said.

The counselors and administration agree that the large freshman class was a contributing factor.

In a statement, Student Services said, “With the late admission cycle, returning from a pandemic/virtual school year, and increased enrollment in the class of 2025, there have been some challenges in scheduling students for the opening of school.”

In fact, this year’s timeline for scheduling was unusually delayed.

“Typically, the process is that we get your [course] requests in February, you fill out your forms, and then we find out, typically in April, who the freshmen are going to be. Then the freshmen fill out their requests,” principal Dr. Bonitatibus said.

However, the class of 2025 didn’t find out that they were admitted to Jefferson until June 23. The rising freshmen were then given two weeks to enroll in the school and another week to choose their courses.

“We wanted to try to be as open as possible to give our freshmen the opportunity that every other TJ student has had, to be able to have some choice. We had to work really hard for two or three weeks once we got all [the students’] requests in,” Bonitatibus said.

Operating with the uncertainty of a pandemic and resulting delays, schedules were not always optimal, but counselors and administrators continue to work on it for the benefit of students.

“For those of you who are seniors, you know that in past years your schedule has looked better,” Bonitatibus said. “Those problems haven’t been there; we know how to build a schedule. We know how to meet your needs. But this was a really unique circumstance, and we’ve done the best we can.”