No one hires the right people to direct Miranda musicals. 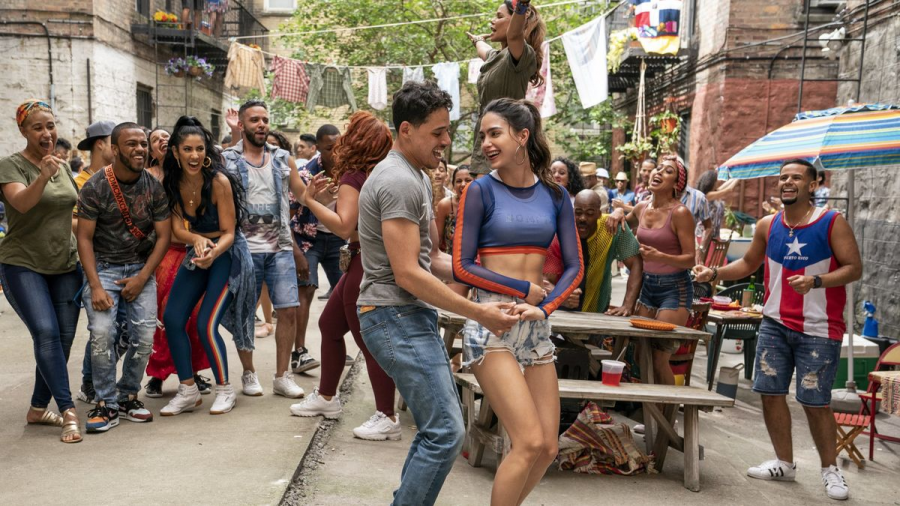 Everyone enjoys a backyard fiesta in “In The Heights”, seemingly unaware of the 100+ degree weather.

I want to start this out by saying that despite everything I’m about to say, I’m very glad that people are so excited about “In The Heights”. Lin Manuel Miranda’s original musical was already clearly influenced by cinema—the “Do the Right Thing” (1989) parallels in the setting are pretty blatant—so it seems fitting that after his wild success with “Hamilton” (2015), his first labor of love is finally able to get a big budget screen adaptation. It’s also exciting to see such a high profile movie that is almost exclusively staffed and performed by Hispanic actors and filmmakers, considering that Latine people in the American film industry have historically been demeaned, replaced (Natalie Wood is no Puerto Rican), and put into awful roles. With all this said, despite all the talent and effort put into this movie by the writers and performers, I left it feeling empty.

But before we get into the things which bugged me, let me tell you why it’s likely you will love the movie. The songs are, for the most part, excellent. Lin Manuel Miranda is a pretty terrific song writer, and even though you should probably know exactly how his raps flow now because of “Hamilton”, they’re still ravenous ear worms at the best of times. And the soundtrack isn’t all hip hop, either. There are your typical romance and “I want” songs, but there are also so many bombastic, unabashedly Latin-style songs which do wonders to characterize everyone in the film. Each of the songs’ instrumentals are a phenomenal work of composition and sound mixing. Even when the characters aren’t singing and dancing, the writing is quite good. I mean, it’s not Shakes- actually, I don’t like Shakespeare that much. It’s not Lorraine Hansberry, but the characters are pretty well written and the story tackles interesting themes of cultural identity and family heritage in ways you won’t find other musicals doing.

So with all that out of the way, what did I not like? Well, I thought the film was presented kind of abysmally. This probably mostly comes down to the director, Jon M. Chu, who, apart from his work on “Crazy Rich Asians” (2018), has mostly worked on bottom-of-the-barrel stuff like “G.I. Joe: Retaliation” (2013) and the universally panned “Jem and the Holograms” (2015). With the knowledge that the most well liked movie of his career so far was a romantic comedy, it’s not unsurprising that this is one of the most lousily shot musicals I’ve seen in recent memory. Rarely are there choices ever made in the composition to emphasize the emotion of a scene, the color finds new ways to be poorly utilized at every turn, and the horrible editing conveys a serious lack of confidence in the film’s visuals. Let’s knock these out one by one.

The easiest thing to explain is the color. Unless there is a literal colored light shining on an actor, the colors just don’t pop in the way that they really should in a musical, and don’t fit the tone of the movie in the way that they could. Let’s zero in on one thing: the heat. In the film, it’s the hottest couple of days of the summer, and every single character constantly draws attention to that in their dialogue. Disregarding that lots of people are wearing clothes which are probably too warm, let’s take a look at how the color conveys this constant heat, which, let me remind you, is a very important part of the film’s setting.

Now, what does this shot do to visually convey the scorching heat? Well, it doesn’t, really. The day is overcast, and much like the rest of the film’s outside scenes, is overwhelmingly gray. Along with that, the actors are in undoubtedly warm jeans and are completely dry, nary a drop of sweat to be found. But I can hear you now, screaming at your screen in the middle of the night. “Max, Max, you rube, how are they supposed to make it look hot? Isn’t dialogue enough?” Well, I’m glad you asked! Here’s how a movie with a terrific director did it.

You didn’t think I’d bring up “Do the Right Thing” willy nilly, did you? No, no, no, if you’re going to have a story about an ethnic minority neighborhood in New York during the hottest days of the summer, you can’t not mention the king of that kind of movie. Look at how the color in the frame conveys the heat. I can imagine the first thing that sticks out to you is that the shot is incredibly orange. But not only is the color palate orange, it’s been intentionally placed in front of buildings with warmly colored brick foundations. They could’ve easily placed this scene 100 feet to the right with the sky in the background, but that wouldn’t have conveyed the heat visually as well. And to add onto that, just look at Radio Raheem! His forehead is glistening in sweat! This is all basic stuff, but “In The Heights” just doesn’t do it.

As for the other things, I think they’re even more atrocious. The shot composition is lackluster in such a way that it almost feels embarrassing to call it composition. It’s not that the film is ugly, but it just seems a little lazy. Actors are placed in places which seem pretty arbitrary, the most interesting shots just look like they come out of gaudy music videos, and even when the occasional shot is put together in an interesting way, they don’t hold on to it for more than a couple of seconds! Of course, that brings me to the editing, which is by far the worst aspect of the movie. I counted three conversations where they screwed up shot reverse-shot dialogue editing, where an uncanny amount of dialogue was said offscreen for no discernible reason. But the editing was at its worst during musical segments. The editing does little to nothing to preserve scene direction and geography during the more hectic musical numbers, and cuts far too often in the more personal numbers. There’s even a musical number where they shot and edited it like a shot reverse-shot conversation, despite having plenty of space to dance in!

So many of these problems could’ve been avoided with more confident staging and a single camera. Instead, what we got was one of the most interesting scripts for and soundtracks to a musical in years reduced to visual soup by awful execution on behalf of the director, editor, and various other visual departments. I understand that the job of directing a musical is difficult, and editing one must be hell if your director either gave you too much to work with or didn’t give you very much good material. I almost don’t want to blame Mr Chu, because it probably wasn’t his fault that some studio executive hired someone so woefully unprepared to direct a musical. I can imagine a world where they hired someone like Barry Jenkins, Steve McQueen, or Sam Levinson to direct and “In the Heights” was a modern masterpiece (especially because they’re also very good at getting good performances out of people). But alas, that’s but a dream, and I’m here stuck with reality.