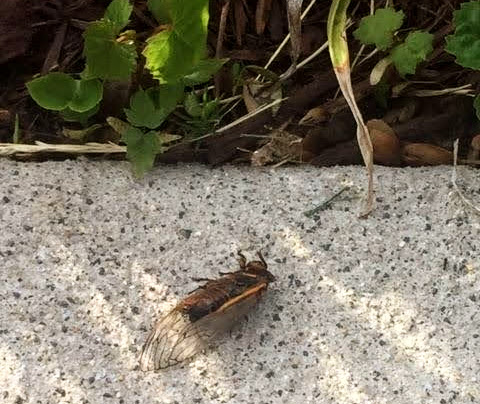 One cicada crawls ahead of the pack, already completing the last stage of its life cycle: perpetuating the population.

In a once in seventeen years occurrence, the cicadas have come up from the earth again to fill the skies with their carapaces. These cicadas burrow deep underground and stay there for a long time, gathering resources and preparing to come into the world, breed with other cicadas, and then wither away in their one day of glory.

Cicadas are also very biologically unique, especially because they are only active for a few weeks every seventeen years.

“What is fascinating is that 12,000 years ago, [there weren’t] periodic cicadas because, 18,000 years ago, this was tundra. They adapted to the change so quickly and then evolved 17 separate 17-year broods so quickly,” said Nate Erwin, entomologist.

Of course, the massive swarms of cicadas that are already slowly crawling out of the ground, with many being seen across Virginia already. People have begun to prepare for this “bug apocalypse” in many different ways.

Some people have had outdoor projects disturbed by these insects. Junior Albert Zeng has had an eagle project, a task which usually involves community service that allows a scout to be promoted to the highest rank in scouting society.

“I had planted saplings, and because of the cicadas, I had to put some netting over the seedling cages after the project to protect them from the cicadas,”  junior Albert Zeng said.

Other people are preparing for the noise.

“They say cicadas will produce a noise that goes up to 100 decibels, which is about the sound of a lawn mower. I play lawnmower sounds in my headphones at night since my mom wouldn’t let me turn on actual lawnmowers,” senior Timothy Palamarchuk said.

However, despite the worries some feel about the cicadas, students are also looking forward to this rare occurrence.

“I’m a big fan of cicadas; they [have] pretty cool eyes. I’m looking forward to seeing them come out of the ground. I do think that they will have some sort of impact on the farming culture, which I think overall will benefit the masses,” Palamarchuk said.

Senior Sahaj Vederey, who enjoys cooking and baking in his free time, sees the cicadas as an opportunity to try something new.

“I heard that [cicadas] were really nutritious, and just last week I was reading about something called a cicada cookie. It’s very simple. They’ll boil [cicadas] for around like five or six minutes, [to] get all the [bacteria] out of it, and then after you’ve parboiled them, you will roast them in the oven or on a grill, and then you bake any type of cookie you want. Halfway through the baking process, they put the cicadas on top, and then that’s it, cicada cookies. I really want to try them, and I’m really excited for that,” Vederey said.

Even with the cicadas being a completely new sight to some, others may see them as a way to relive the past.

“Growing up in Massachusetts, I saw a lot of cicadas. It wouldn’t be a normal summer without going outside and seeing cicadas or old cicada exoskeletons everywhere,” Palamarchuk said. “They are a big part of my childhood, so seeing cicadas again in Virginia is definitely going to bring back some nostalgic memories.”