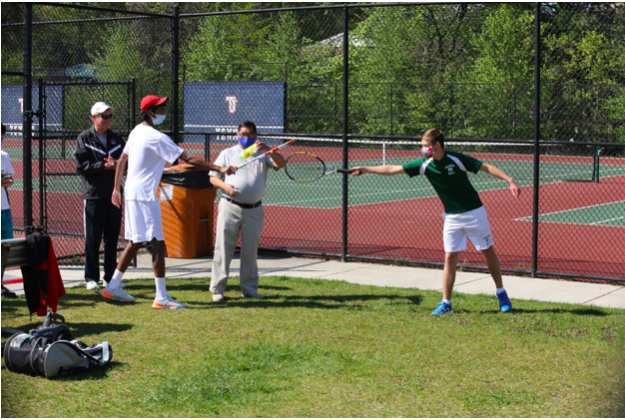 The Jefferson tennis courts are where new players develop into experienced leaders on the court. Untouched by the school tennis teams for over a year, it fosters a sense of nostalgia for returning players. “The individual games were sometimes really close, which we had to persevere through-- we did a pretty good job of that. We won a lot of the closer games, which helped us win the match against Marshall. Essentially, coming out in the crucial moments helped us a lot,” senior Ajay Prabhakar said.

During a home match on Monday, May 3, Jefferson’s boys tennis team won their second match against the George C. Marshall Statesmen with a score of 9-0.
Having previously won a match against the Statesmen on Friday, Apr. 23, the players knew exactly what to expect and how to prepare for it.

“The first time we played them, we didn’t really know the strengths and weaknesses of their players because we hadn’t really seen them play before. But then the second time around I think that we felt more comfortable playing them because we knew our strategy. Going into the match, we were prepared for what they had,” senior Ajay Prabhakar said. “They were probably one of the better teams we played throughout the year. Even though the scores weren’t super close, there were a lot of good points and a lot of close games.”
Furthermore, despite the cancellation of the 2019-2020 spring sports season due to COVID-19, the team’s strong bond remains intact. While many view tennis as an independent sport, high school tennis relies strongly on sportsmanship and collaboration.

“Before TJ tennis, playing tournaments were more individual, but playing on a high school team gives you that sense of community. It’s really nice to have other people cheering you on, and it’s really helped improve my game as well,” Prabhakar said.

Not only is teamwork an essential part of tennis, but the ability to keep a positive mindset and a coachable attitude are also values of the Jefferson boys tennis team.

“One important thing is to always keep a level head during your matches. Don’t let any small point or occurrence bog you down. Always be ready to do what your coach asks. It’s good to be open to different things– playing doubles with someone else, playing a different singles spot. Supporting your teammates is also really helpful because it provides a good sense of camaraderie in the group,” Prabhakar said.

Having already played five games this season, the team is on an undefeated streak. With the team morale and skill to back it up, the Jefferson team plans to win yet another state championship. If successful, it would be the team’s eighth championship in a row.

“I’m going to miss a lot of the people that I’ve met, even seniors from last year and years past. It’s definitely been a great ride, and I hope we hope to cap it off with another state championship because our team is definitely capable of winning one,” Prabhakar said. “We just got to stay focused and take it one match at a time.”