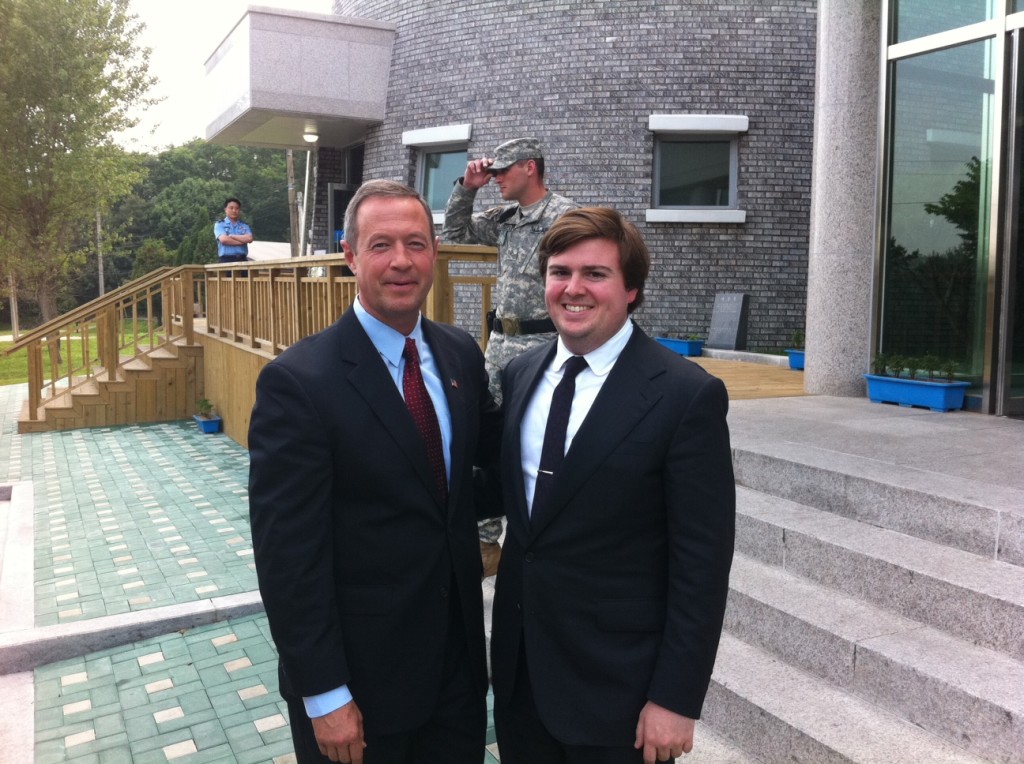 Burdette with Maryland Gov. Martin O’Malley at the DMZ in South Korea.

For a former editor-in-chief, being in the cross-hairs of an international crisis isn’t that far removed. And that’s exactly where Class of 2005 graduate Brendan Burdette  found himself recently.

As an official representative of the Department of State to Congress, he spent the last several weeks supporting the department’s response to Congressional inquiries regarding the recent tragedy in Benghazi.

Working for the State Department, Burdette recalls his experiences as editor-in-chief of tjTODAY and as a starting center on the varsity football team during his senior year at Jefferson. “I gained very helpful skills in both activities,” Burdette said.

After graduating in 2005, Burdette attended the University of Virginia (U.Va.) to study history and economics.

“I studied history because I really enjoy the subject. I added economics because I really loved the intro class I took almost solely because I read ‘Freakonomics’ the summer before my first year,” Burdette said. “I thought the principles of economics would be useful to me in life, as well as in a pretty wide variety of occupations.”

Burdette attended U.Va. for five years. His fifth year was spent finishing up his Masters in Public Policy as a member of the second class to graduate from the Frank Batten School of Leadership and Public Policy.

Burdette moved on to work in the State Department as a staff assistant for the assistant secretary for East Asian and Pacific Affairs and now works in the Legislative Affairs Bureau.

“The job I had at State before I switched to the Legislative Affairs Bureau actually reminded me a lot of being a newspaper editor,” Burdette said. A staff assistant’s job is to organize the papers for the secretary, her deputies and even for the White House, as the bureau did when President Obama traveled to Burma, Cambodia and Thailand.

“It takes a lot of cajoling, encouragement and time management skills—the same traits it takes to be a successful newspaper editor, in my experience,” Burdette said.

Another memorable Jefferson experience that influenced Burdette was playing football.

“Our offense was really fantastic—we were lighting up teams, and it was a lot of fun,” Burdette said.

Burdette originally played as a defensive lineman and was not scheduled to be a starter. However, the team’s starting center suffered a knee injury that put him out for the season, and Burdette stepped up to take his place.

Burdette took his experiences from football and applied them to his work.

“In football, you need to be able to adapt to difficult experiences and learn to play a smaller role as part of a group striving for a larger purpose,” Burdette said. “And for those who make the foreign policy world a career, the dues you pay along the way might lead to the job you envisioned when you were involved in Model UN, much as the times getting smacked around on the freshman team might give you an opportunity to be part of a pretty successful team during your senior season.”

Burdette’s commitment to the team helped them surprise many people by breaking the school record for wins and making it to the playoffs.

“Not very many kids would have been able to step up to the degree that Brendan did. It’s still one of the best stories that have happened over the years in the TJ football program. We still talk about it today,” Travis said.

Burdette hopes to stay in public policy and plans to apply to MBA/JD programs.

“I’ll want to remain in public service for a good portion of my life, but I would like to gain some flexibility to work in the private sector—in a field not necessarily tied to the federal government—as well,” Burdette said.