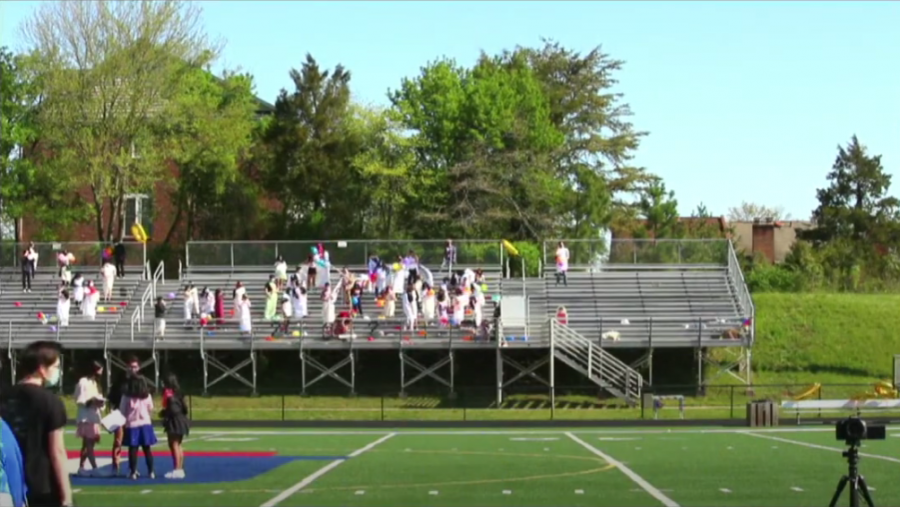 Students gather on the bleachers, waiting for a pep rally to begin on Apr. 17.

Homecoming, a long-standing tradition for high schools across America to celebrate their school and their alumni, took place virtually this year. The buildup to the events, which are the culmination of students’ homecoming spirit, was drastically different this year. Instead of many of the typical face-to-face events, this year’s selection included a chess tournament, a Minecraft tournament, and a virtual scavenger hunt, among other virtual contests.

Some students thought that this year’s events were more engaging.

“I thought the events were interesting! I think that the bubble soccer was a really creative idea that also helped to excite people [and] get them in the spirit of [homecoming],” sophomore Jessica May said.

Some students, on the other hand, have not participated as much as in past years due to various reasons.

“Personally, I’ve not been too invested into homecoming this year; I’ve heard much less about it compared to last year, when homecoming was on everyone’s minds. However, I do think that some of the new events this year are far more engaging on an individual level,” sophomore Aidan Li said.

Some students didn’t participate as much because of the “senioritis” syndrome.

“I didn’t really participate in most of the events this year, and I’ve been kind of lazy. But…  the chess tournament was nice, and the Minecraft tournament was pretty good as well,” senior Viraj Boreda said.

The pep rallies this year also had a lower turnout, since COVID dictated that not as many people could gather in one place. Still, most of the school watched through the livestream on Youtube.

“I thought that it went really well! We probably could’ve done a little better in terms of social distancing, but I think we were all so excited to see our friends that we sort of forgot to keep our distances. That being said, the teachers did a good job reminding us.” May said.  “Even with the changes due to COVID, I thought that you could still feel the school spirit at the pep rally and I’m super glad that I went!”

“I think it was pretty fun to watch and it was a good way to take a break from homework,” sophomore Raghav Tirumale said.

Even if most of the Homecoming events were a success, some people think that it could have been improved.

“I felt that their outreach was a little lacking, although that can’t really be helped. I would have liked to see more competitive events— maybe a valorant tournament would have been pretty fun—but [that] may just be my personal biases,” Li said.

“I think that we could’ve done a little bit better with social distancing, but that’s on us as individuals,” May said.

Ultimately, despite the limitations of the virtual environment, Homecoming was fun for almost all attendees and students showed droves of school spirit. It also showed the Jefferson community that virtual celebratory events like this could be done.

“I felt like Homecoming so far has been quite a success, and I hope that online events will still be held next year, in-person or not,” Li said.