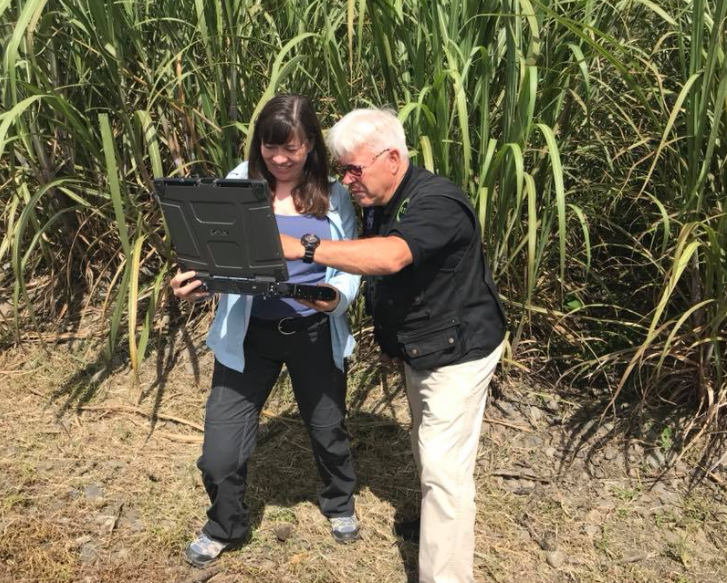 Jovanovic visits a hydromapping site as part of a diplomatic mission to Costa Rica.

Diplomacy has always been a popular topic at Jefferson. TJMUN, Jefferson’s Model United Nations Club, has over 150 active members. But what about pursuing diplomacy as an actual career? Is that feasible, and what are the benefits, drawbacks, and caveats of a career as a diplomat? To answer those questions, tjTODAY interviewed Heidi Jovanovic, a foreign service officer and alum from Jefferson’s second-ever graduating class.

So, what is a diplomat?

“The classic work of a diplomat is to relay messages to and from foreign governments. So when the US government has a message to deliver, you’re constantly meeting with government officials [from foreign countries] and delivering messages to them. For example, if there’s going to be an election in the UN for a candidate for whatever body and the US government supports this particular candidate. I would go over there and try to convince them to vote with us”

However, while MUN and other activities may lead us to believe that diplomacy is mainly argumentation and/or idea-drafting, it actually covers work related to a wide range of fields, from journalism to clerical work.

“What we also do is we write a lot. Diplomats are our journalists in their own way, except we don’t write so much for the public audience, we write for our audience in Washington,  to the political and economic officers, and we write for our fellow US government officials,” Jovanovic said. “And back in Washington, when they make the policy, they’ll use information [that we  provide] about what’s happening in the field, so we’re out there like reporters, gathering information.”

Diplomacy is also not always about formal meetings and office work. A lot of what diplomats do, especially the more journalistic side of the career, can involve fieldwork, like formally supporting cultural organizations and events from their home country in the foreign country they are in, gathering information about ideas other countries may be implementing, and more.

Jovanovic is part of the U.S. Foreign Service, which handles most relations, embassy, and consular work between the U.S, the U.N., as well as with foreign countries. Within the foreign service, there are a variety of types of jobs and tasks available depending on what you are most interested in, which are sorted into five general categories, which are referred to as “cones.” New members of the foreign service decide which cone they will enter. These include economics officers, political officers, management officers, and consular officers. Jovanovic also mentioned that diplomats do not necessarily start working in the cone they chose.

Foreign service jobs are generally more short-term, and diplomats, at least in the foreign service, change posts every one to years, so what a diplomat’s job entails can change drastically.

“For example, in my career, my first year I was an ESTH officer in London, which is an environment science technology and health officer, and so I was working on environmental issues. Then, I spent another year in London as a consular officer interviewing 100 visa applicants a day, so that was one day in the life,” Jovanovic said. “And then for my third assignment, I came back to the US and I went to full time Serbian language training for nine months, so that was totally different.”

Also, while diplomacy, by nature, generally involves a lot of moving around, this does not necessarily have to be the case.

“[People who do not want to move around] could join the State Department as a civil service,” Jovanovic said,  “The state department has two different branches: the Foreign Service (the diplomats), [and] they also have the civil service, which  [is] like a regular Washington job.”

For those who do wish to move around, the State Department makes it as easy as possible.

“When you look at the State Department, they do a lot to facilitate that process [of moving around]. It’s still hard, don’t get me wrong. But for those of us who have that passion for travel and adventure, we welcome that hardship in some way. It’s always nice to start over again. You’re also joining an embassy community, and a lot of people work really hard to make that a community.” Jovanovic said. “So there’s family, you know, there’s events for families, there’s events for singles, and it depends on the embassy, and every embassy has its own personality. But they do a lot. When you arrive, you have a sponsor, that’s somebody who has agreed to like meet you at the airport and pick you up, and your housing is provided.”

Jovanovic also mentioned that even within the foreign service, diplomats can be assigned to posts in the U.S. for a time.

Jovanovic shared some of the moments and posts that made the career worth it for her.

“I’ve had so many amazing opportunities in this career. As the regional environment, science, technology and health officer, I had the opportunity to travel all around Central America in the Caribbean and visit our embassies there. And to visit with all sorts of local NGOs and different partners.” Jovanovic said. “For example, the US government provides a lot of funding for projects around the world. As part of an assignment [to central America], we worked a lot on solid waste. I ended up visiting a lot of landfills, and it’s very interesting to go and see different landfills and see how different countries manage [them]. And ever since then, honestly, I’ve never looked at trash the same way.”

For students looking into a career in diplomacy, Jovanovic noted that the state department’s foreign service internship program is a way to determine whether diplomacy is a good career fit.

“It’s for American citizen university students, and I would highly recommend that program to any student. It’s a really great program, and they can apply to work either in Washington, DC, or at our embassies overseas.” Jovanovic said. “And one thing I’ve noticed is that I never felt like we got enough applicants for the overseas [programs]. I mean, I understand because they’re not paid, and the interns have to pay for their own flights and their own housing, they can move to another country and all that. But they’re really great internships and interns got a lot out of doing them. I would highly recommend it to anyone who has an interest in this type of work.”

And finally, what’s the path for those wishing to become a diplomat? At least for the foreign service, there is a yearly test that those wishing to become a diplomat can take, regardless of their college degree. Unfortunately, this test is incredibly competitive, so even those who have spent years studying are not guaranteed to pass. Jovanovic recommends study through a college education majoring in relevant fields.

“You’ll find all degrees possible in the Foreign Service because there are no specific requirements, you just have to pass the test. The test includes a lot of International Affairs, US politics, US government, US history, and World History. So any degree that gives you information of that type will help you pass the test and will help you in your career,” Jovanovic said. “My undergrad degree was in economics– a double major in economics and international development, so that was very helpful. And then actually, I continued on to law school. There’s lots of lawyers in the Foreign Service.”

Jovanovic highlights the importance of getting experience with diplomatic work.

“I think the best thing you can do is get international experience because I actually failed the oral exam the first time I took it. After, I did six weeks of volunteer work in the Caribbean and Grenada, and I did a four month short term job at the UN in Germany. When I came back into the oral exam after that, I did much better, so I think I needed that. The exam is not just factual questions. It’s scenarios and other things to test your judgment and international experience to be able to operate in that world [of diplomacy].”