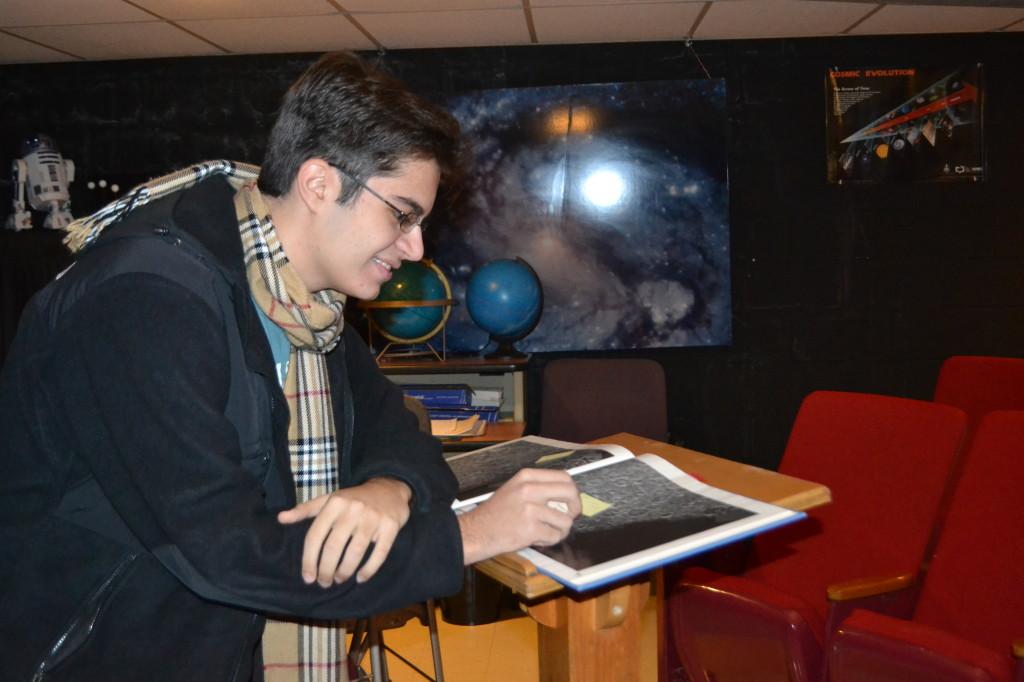 Senior Paul Naanou is studying the fault lines of Mercury.

Every day, the seniors of the Astronomy Research lab sit in the planetarium, drinking hot chocolate and comparing work.  For them, it is an important part of their projects to collaborate with the other students and professional scientists in the field. The seniors are in the midst of their projects, collecting and analyzing data from orbiters circling Earth and Mars. They are looking at a range of topics, such as using information from an instrument on the building roof that collects radio waves to study the effects of radio emissions on the Earth from the sun, Jupiter and the galaxy.

Many of the seniors are collaborating with scientists from NASA and other organizations. On Dec. 20, Jim Zimbelman spoke with the seniors about their projects. Zimbelman works at the Center of Earth and Planetary Studies based at the National Air and Space Museum, where he studies geological mapping of Mars and Venus. Senior Carlisle Wishard has been working with Zimbelman all year on her project, finding lava flows on Mars. Astronomy Research lab director Leeann Hennig put Wishard in contact with Zimbelman. Wishard knew she wanted to study the solar system, and Zimbelman helped her narrow down her ideas. While she has been emailing and talking on the phone with Zimbelman, Wishard was excited to meet him face to face.

“It is such a huge honor to be working with a scientist from the National Air and Space Museum, and I am so grateful I have been given that chance. From what I can tell, he is very interested in my work,” Wishard said. Wishard joined the lab after trying out the prerequisite semester courses. She hopes to minor in astronomy in college.

“I feel like all of us in this lab are diving into new, exciting territory. Everybody is doing something amazing, and it is a wonderful learning and work environment,” Wishard said.

Other students are also collaborating with outside professors. Senior Michael Sheaffer is working closely with Derek Richardson, a professor at the University of Maryland, on his project studying landslides on asteroids. Sheaffer knew he wanted to work with asteroids and was directed to Richardson by Hennig. Seniors decided on the Astronomy Research lab for various reasons. Some students in the lab are, like Wishard, looking to continue to work in that field.

One of them is senior Deanna Buttaro, who joined the lab after trying the electives. She is studying weather patterns on Saturn. Buttaro wishes to incorporate astronomy into her dream of becoming an engineer.

“Right now, astronomical research heavily focuses on objects in our solar system like asteroids, Mars and other planets, but if I could work to develop a spacecraft with the capability of travelling much farther outside of the solar system with more efficient methods than what we have today, we would learn so much more about the galaxy,” Buttaro said.

Others are exploring astronomy as a hobby. Senior Michaela Brown has been involved in the Astronomy Club since freshman year. “Astronomy is a cross-section of science and philosophy. The concepts that I learn are so far beyond human understanding, and yet the amount that we continue to discover is astounding,” Brown said.