Cough, catch cold: Preventing cold and flu transmission can be a daunting task 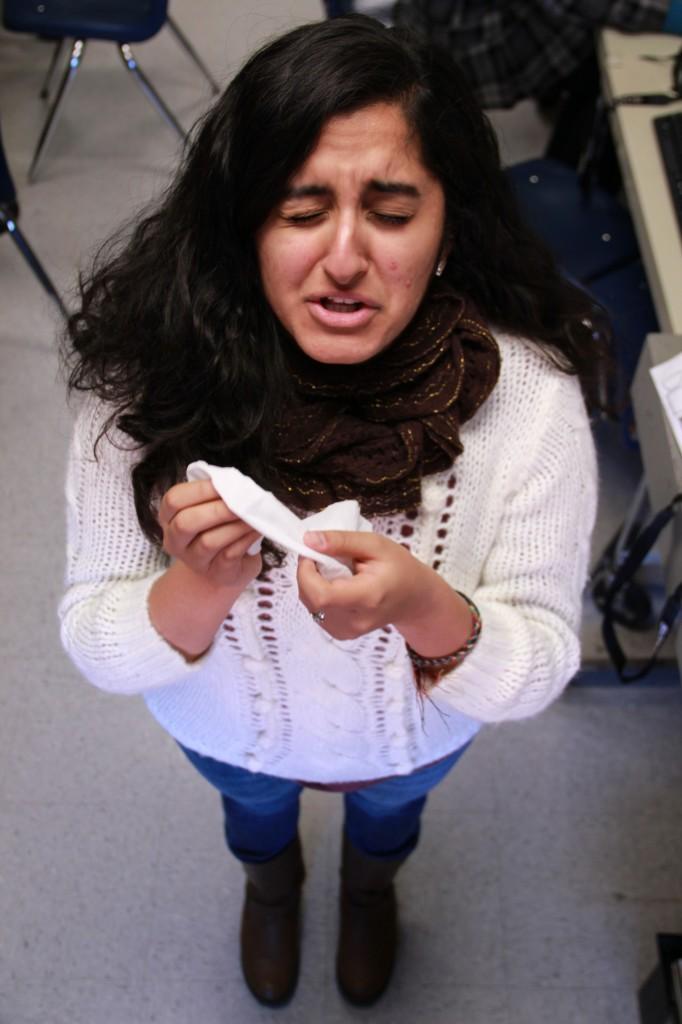 National Influenza Vaccination Week was Dec. 8-12, and none too soon. According to the Centers for Disease Control and Prevention (CDC), an early flu season has now begun, and it appears it will be one of the worst flu seasons in a while.

Senior Sid Sivakumar, who was out for three days because of the flu, was taken by surprise and missed a lot of work .He hadn’t gotten his flu shot yet this year.

“Most people think it’s not going to happen to them.They aren’t going to get the flu, but once you get it, you realize how important it is to protect yourself and get a flu shot,” Sivakumar said.

Although flu season doesn’t usually peak until January, the number of reported cases is much higher at this point than it has been at the same time in previous years, according to NBC News. Two children have already died from the flu.

The flu is caused by the influenza virus while the common cold can be caused by over 200 viruses. However, it is most commonly caused by the rhinovirus according to the CDC. They both cause sore throat, coughing and a runny nose, but the flu can cause more serious symptoms such as high fever, body aches and vomiting.

According to the CDC, 40 percent of students missed school due to illness last year. Germs travel swiftly through schools because students can be contagious one day before they show symptoms. The flu can be spread both through the air and through contact doors, desks or keyboards that infected people have touched.

“We need to have more hand sanitizer, and the bathrooms need to be a lot cleaner,” freshman Cheryl Mensah said.

Although many attempt to control the spread of illnesses in the school, it is very difficult to contain it in an environment when a high number of students come in close contact with each other daily.

Kirstin Stamper, the School Health Aide, believes that students need to stay home if they are sick to protect others, even if it means making up schoolwork.

“It is important to stay home while you are sick. Fairfax County Public Schools recommend that a student stays home 24 hours after a fever of 100 degrees Fahrenheit or over breaks without the aid of a fever-reducing medication,” Stamper said.

However, a lot of students are scared that they will miss lessons or important instruction when they are absent due to illness, so they try not to be absent even when they are sick.

“No one at Jefferson stays at home when they’re sick, and I don’t want to miss school because I would fall behind in all my classes,” freshman Valentina Lohr said.

Fortunately, unlike the common cold, the flu is preventable through vaccines. The CDC recommends that everyone older than six months get an annual flu vaccine. Stamper believes it is important to get vaccinated to protect oneself and others. Vaccines are offered at pharmacies such as Wal-Mart and Walgreens as well as at the Fairfax County Health Department.

Students prefer not to get a flu shot for various reasons, such as fear of needles or a preference not to change their bodies’ immune systems.

“I don’t like messing with my immune system. If there is a required vaccine, I’ll get it, but if there’s an option, I prefer to opt out. I don’t even like to take painkillers,” sophomore Prashanth Panicker said.

However, many students feel that the vaccine is the most effective way to protect themselves so they don’t catch anything.

“If I were to get the flu, I wouldn’t be able to go to school or do fun things on the weekends, so I have to protect myself and the best way to do that is with a flu shot,” sophomore Adrien Bernard said.

Students should also make sure they are getting enough sleep. According to Deann Ryberg, a public health nurse, the recommended amount of sleep for high school students is about 8.5 to 9.5 hours of sleep per night. Ryberg believes that staying up all night is not a good decision normally, but it is especially important to sleep during this season, when students are at high risk of getting sick.

“Sleep is very important to your health. If you do not get sufficient sleep, it impacts the function of your immune system. In fact, studies have shown that lack of sleep not only makes you more susceptible to infections such as the common cold but also may increase the time it takes you to recover,” Ryberg said.

Besides getting flu shots, there are easier ways to protect oneself and others from disease. Hand washing is the simplest but one of the most effective ways to prevent the spread of disease, and it is especially important after one coughs or sneezes. Covering one’s mouth when coughing could save someone else from getting infected.

“If you hear it’s a bad season, take steps to protect yourself. Preventative measures are better than cures,” Sivakumar said.