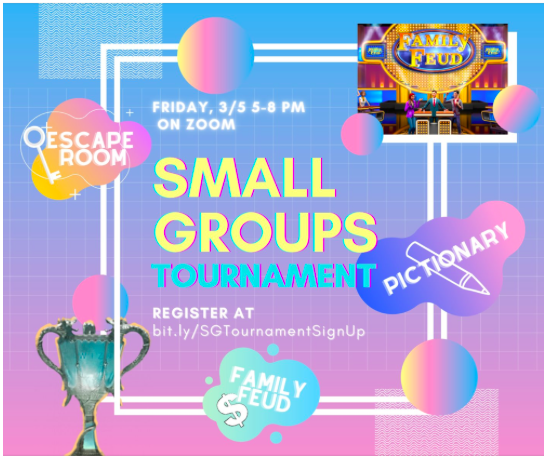 “Originally this small group's idea was intended for seniors, but I think it would be really cool if this could be continued by the SGA officers in the future. It gives people, especially freshmen, the chance to have direct opportunity to meet others. My vision for this is to allow people to receive support when they need it, and it would be great to see in-person events eventually,” Lee said.

The Jefferson Student Government Association (SGA) held their first ever Small Groups Tournament on Friday, March 5.Students of all grades came together to participate in multiple exciting showdowns, from games like Pictionary, Family Feud, and even an Escape Room designed by Jefferson’s very own Escape Room Club.

“A small group is a group of 6 to 10 students that were sorted together to bond, and they usually have meetings when they are free to talk about what’s going on in their lives. We wanted to make sure people had social interaction, especially during this virtual school year. Since it is something that would be missing as everyone is separated, so this program was made to bring that back, like a group of friends who go through TJ together,” Lee said.

Specifically during times like these, it is important to continue interacting and engaging with peers. Small Groups allow this bonding between students to get to know new people, as well as make time for friends.

“We wanted to find some sort of way for small groups to bond together, an event where would have them work towards a common goal. Usually when you’re in situations like that, you tend to bond with people better. We wanted to also create a stronger dynamic between the group, since we are the ones who sorted this program. With the second semester small groups, we wanted to make sure that they could interact and work together,” Lee said.

Inspired by his middle school leadership conference, Lee was motivated to initiate a similar event at TJ. During that conference, they completed escape rooms, and other fun games. By seeing the kids form friendships, and work together, this helped shape closer relationships. Using some of the activities and experience he gained from that experience, he developed the activities for the Small Groups Tournament.

“I took inspiration from Harry Potter’s Triwizard Tournament, which had 3 different events. There’s a pictionary, where the moderators draw on the Zoom whiteboard, while contestants guess the image. Whoever guesses correctly, the entire group would receive 1 point for their team. The contestants of the team with the most points, each win a $10 Amazon gift card. There’s an escape room activity, made by TJ’s Escape Room club. This is a really fun activity, because groups can collaborate with each other to try and solve the room. Whoever solves it the fastest wins. The last game is Family Feud where groups go head on, and directly compete with each other, answering TJ specific questions,” Lee said.

All of the activities were unique, and everyone was able to participate. The SGA looks forward to holding similar events in the future to bring the TJ community together.