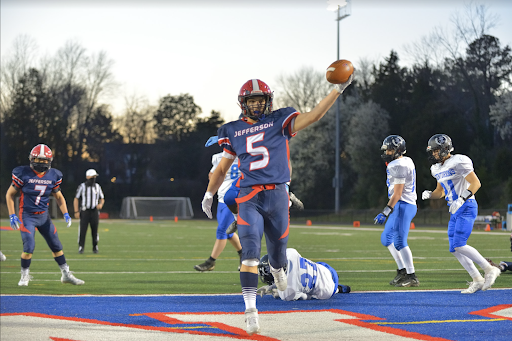 Senior running back Niko Economos (5) scores a touchdown for the Colonials in the second quarter, giving the Colonials a 6-0 lead.

The game drew in a much larger than normal crowd on the Colonial side, which sophomore wide receiver and defensive back Charan Sattiraju (1) appreciated.

“Since it was senior night, there was a much larger attendance at the game compared to our previous games which motivated us, and the crowd noise really helped when we were on defense,” Sattiraju said.

The Colonials kicked off to initiate the game. The first quarter was a back and forth between the teams, as both were able to make substantive drives. However, the quarter was largely a defensive showcase with the Centurions having two interceptions and the Colonials having a fumble recovered by linebacker James Kennedy (55). The first quarter ended with both teams unable to put up points on the board.

Injuries plagued the fourth quarter for both teams. On a punt by the Colonials, defensive back Sumanth Kalluru (19) suffered a hard hit and walked off the field, obviously in pain. However, a few minutes later, a Centurion player hit the ground with a much more serious injury.

This delayed the game for several minutes as an ambulance had to come pick him up. Neither team scored in the fourth quarter; the Centurions won the game 14-6.

Economos believes that the Colonials didn’t lose due to a lack of effort by any members of the team.

“It was just minor mistakes like the penalties and interceptions that cost us the win,” Economos said.

The Colonials will be playing the last game of the season against the Central Maryland Crusaders on April 9th, 7pm at Jefferson.