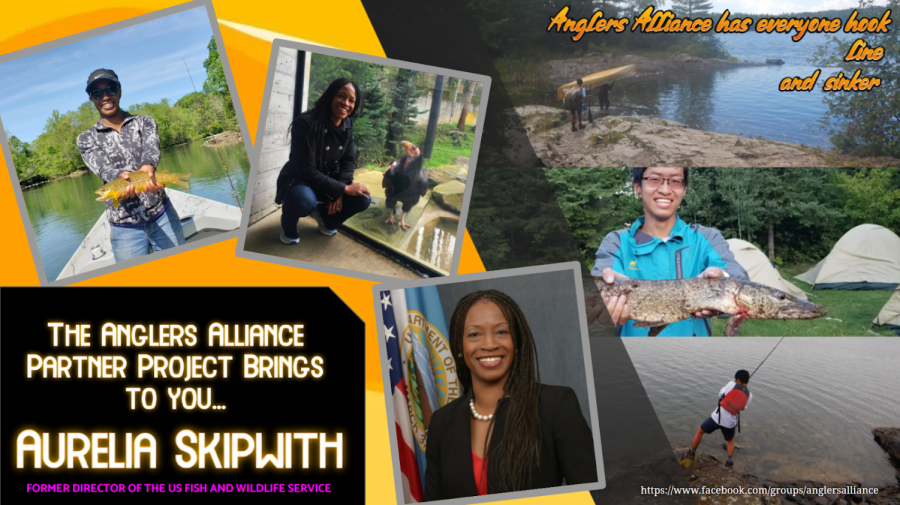 Aurelia Skipwith’s presentation’s introduction slide shows the central message of the club—conservation and having a little fun—in a couple of pictures.

Angler’s Alliance, Jefferson’s very own fishing club, invited Aurelia Skipwith, Director of the United States Fish and Wildlife Service from 2019 to 2021, to speak to Jefferson students. The visit aimed to teach students fishing techniques, the rules and regulations of maintaining the ecosystem, learn about the nautical geography of the Northern VA region, and to cultivate a love and appreciation of aquatic wildlife.

“I would summarize Angler’s Alliance as a place to forget about the stresses of school and other responsibilities. I always have a really fun time creating and presenting the presentations that we make, and it is really nice to see people laugh and enjoy them,” vice president and senior Timothy Palamarchuk said.

The club was pleasantly surprised when Skipwith responded to their speaker request, and such an illustrious guest speaker attracted the interest of over 70 students.

“We wanted to invite the former Director of US Fish and Wildlife Service, Aurelia Skipwith, because we were honestly interested in what we, as students, can do. We’ve all been taught as kids to preserve the environment by not littering and cleaning up outside, but we are really interested in taking it further than that,” Palamarchuk said.

Aurelia Skipwith gave the club a presentation about how the government approaches conservation.

“We can’t secure the future of our wildlife and landscape without engaging and accommodating the need[s] of people that are living on that land,” Skipwith said.

What followed was an explanation of how the nature reserves on public land helped with state budgets and accounted for two percent of the United States’s GDP in 2019.

“Conservation is not only fun for hunters and fishers, but also a boon to the US economy,” Skipwith said.

Although there were obstacles at the beginning, the lecture was a great success.

“In the beginning we had a lot of technical issues, but overall it was very informative and fun,” Palamarchuk said. “For those interested in that kind of career, knowing what we should be doing to help is something we hope[d] to get from this presentation.”