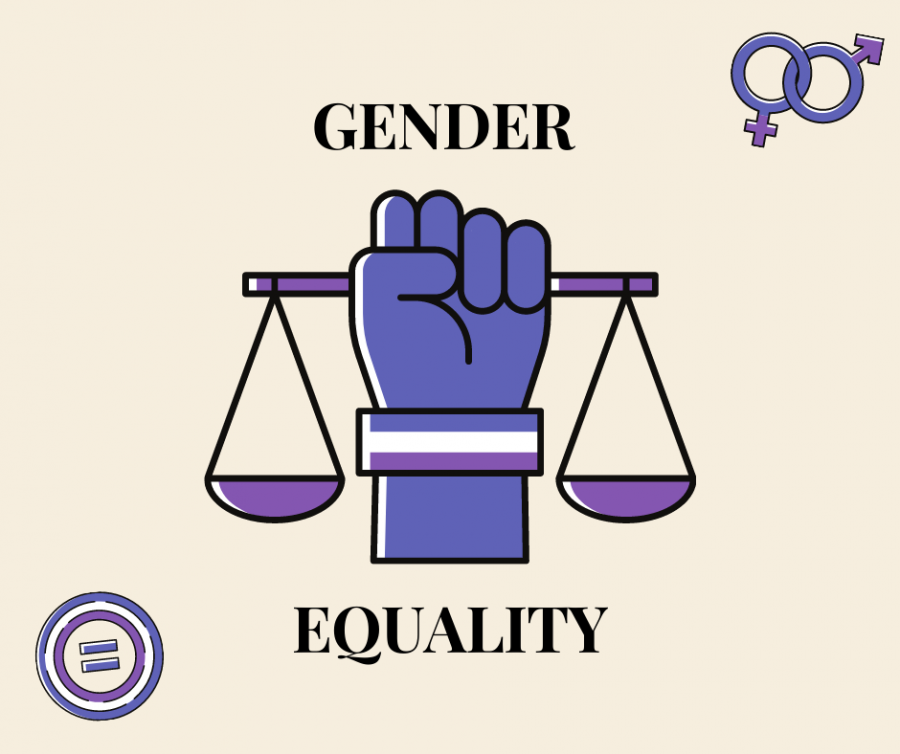 STEM is a field known for having large amounts of gender disparity. But at Jefferson, teachers and administration work to address this issue.

March is National Women’s History Month, a time where people across the country honor the contributions of women in our historical and modern communities. As such, it offers time to reflect on issues of gender inequality and disparity, and the efforts of teachers and staff at Jefferson to address these issues. These issues are of particular concern, seeing as Jefferson is a school focused in science and technology, and these fields are known for deep-rooted issues of gender discrimination.

“Women have traditionally been underrepresented when it comes to STEM fields,” Jefferson principal Dr. Ann Bonitatibus said. “I was a computer science major, and I remember sitting in an auditorium with [other] computer science majors. I was one female out of about 120 people in the room, and when you realize that you’re one of the few, you may not always feel that you have the support that you need or that there are people believing in you.”

Despite these hurdles, Jefferson teachers and staff have worked tirelessly to combat gender inequality at the school. Dr. Bonitatibus talked about some of the ways teachers and administrators have tried to reach out and create a more inclusive space for female students in the school community.

Insight on the situation
In many ways, efforts made by teachers and staff have paid off. This year, Jefferson won the College Board AP Computer Science (CS) Female Diversity Award, as the percentage of female students who took the AP CS exam was equal to or greater than the general percentage of Jefferson female students.

However, it’s taken much hard work to reach this point. Dr. Shane Torbert, a CS teacher at Jefferson, said that the problem wasn’t individual students choosing not to go into a particular course, but when much of the female student population is not taking computer science courses because they are female.

“If an individual student says, ‘I don’t want to take AI,’ that is not an [significant] event for us… The issue is that if almost all of the female students think that they shouldn’t take a [CS] class, or that in college they shouldn’t major in [CS] because they are female, then that is a huge problem,” Torbert said.

“You would regularly find [female] students who would be walking down the hall and they would get to the lab but not go in. They would stop at the door like there was a forcefield, like something was giving them a vibe that it was the wrong thing they were supposed to do,” Torbert said. “The irony of that is in the 1990s, the two original lab directors were a man and a woman. So, it’s not as simple as ‘Oh, we’ll have a woman teaching.’ There was a woman teaching [at the time], and this was still the case.”

How educators are approaching the issue
So, how did the CS team and Jefferson administration tackle this issue? Dr. Torbert explained how he, as an educator, addresses it.

“I think the critical thing from a very high level is [that we] have to decide if the current situation is okay or not,” Torbert said. “If it’s not okay, then you have to do something about it. It’s alright to not know what that something is, and it’s alright to try 100 things and find that they all didn’t work, but you keep trying until you get lucky or the timing is right.”

He also mentioned that instead of trying to exclude male students or add more appeals to female students, the computer science faculty tried to simply take away the things that would exclude female students.

“If all you are concerned with is the male-to-female ratio, you can improve that without adding any more girls,” Torbert said. “You can just exclude boys so that the dominator [of total students] will go down and the numerator [of female students] will stay constant. We thought that was just a scam, so we have actively avoided that.”

In addition, he said that a combination of making classrooms more inviting to all and making the courses broader in content that helped make CS at Jefferson more inclusive.

Ms. Nicole Kim, also a Jefferson CS teacher, stressed the importance of female role models in STEM fields. She shared that her classes, especially Foundations of CS and AP CS, are split almost 50/50 between male and female students. But, only 18% of bachelor degrees in CS go to women, and it is still a male-dominated industry.


Thinking outside of norms
Besides the science and technology courses at Jefferson, the humanities and foreign language departments are also an integral part of the school. Much like Dr. Torbert, German teacher Ms. Szilvia Oszko mentioned that there are areas in gender norms where Jefferson could improve.

“[Jefferson] is a great, progressive school, but we are operating with outdated systems where every official form requires you put a checkmark in one of two genders and bathrooms and locker rooms are strictly binary. We are also still struggling to create a more gender-balanced enrollment,” Oszko said.

In the foreign language department, Ms. Oszko and the German Honor Society (GHS), which she sponsors, are working to dismantle such gender stereotypes.

“[GHS] often hosts big events, and we try to make sure that when jobs get assigned, students don’t get channeled into roles based on their gender,” she said. “Guys are just as good as women in gastronomy, so we expect students of all genders to cook, serve food and drinks, and clean up after the event. These may seem like female jobs to some people, but no one at [Jefferson] should feel that way. Every day we can do something to dismantle these gender biases.”

Dr. Michelle Lang Boswell, an English teacher at Jefferson, shared that she believes it is important for students to see themselves in the literature that is taught in the English classroom and offered insight into some setbacks.

However, many of the books that are considered “classics” are written by and for white, straight, cisgender men, so it falls upon teachers to find and recommend diverse books to students, and teachers may not have time to find, read through, contemplate, and get such books approved between grading and teaching.Overall, though, Dr. Boswell is hopeful about the future.