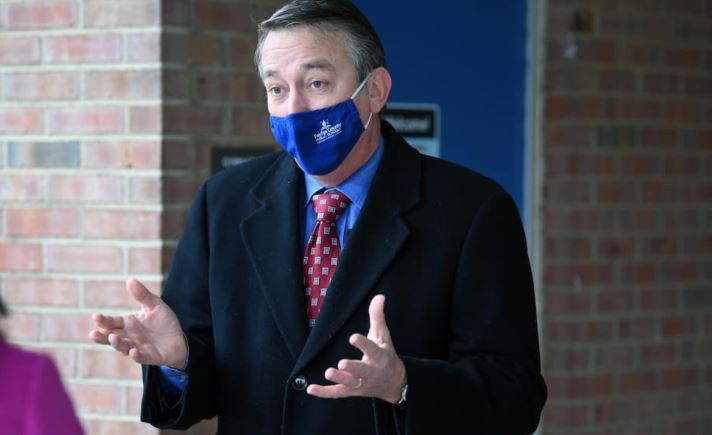 Superintendent Scott Brabrand discusses fourth quarter grading policies with the school board. The number of FCPS middle and high school students earning F’s increased by 83 percent after schools shut down, leading to policies aiming to improve academic performance. “We’ve given out zeros for years at our high schools that were inequitable, disproportionate, that buried kids alive,” Brabrand said. “This pandemic finally brought their voices out, as they were crying in the wilderness for help.”

Fairfax County Public Schools (FCPS) Superintendent Scott Brabrand announced that final exam scores will only be included in the gradebook if they’re beneficial to the student’s grade in that class. Furthermore, all F’s earned in high-school credit-bearing courses will turn into no marks on report cards, and students have the option to turn two letter grades into passes.

“I’ve been a big proponent of evaluation being used as growth over time, as opposed to measuring discrete knowledge that can be demonstrated during a discrete time on a very specific day.” Jefferson principal Ann Bonitatibus said. “It is an excellent decision to say that any final cumulative assessment would help a student and not hurt them.”

In addition to higher grades, the stress that often accumulates during finals week will be diminished.

“It’s going to benefit the students that have been on top of their work best,” math teacher Corey Lightner said. “I’m glad that the county is really taking student well-being seriously.”

FCPS took both students’ health and academic difficulties into account when making their decision to turn Fs into no marks.

“A no mark is more considerate of the possibility that a student may have had difficulty mastering the curriculum, without feeling penalized by getting a zero averaged into their GPA,” Bonitatibus said.

Allowing students to choose up to two letter grades to turn into passes has put a lot of the decision-making into their hands.

“It goes back to giving some allowances for the difficulties that students have had throughout the year to achieve at the level that they feel satisfied with,” Bonitatibus said.