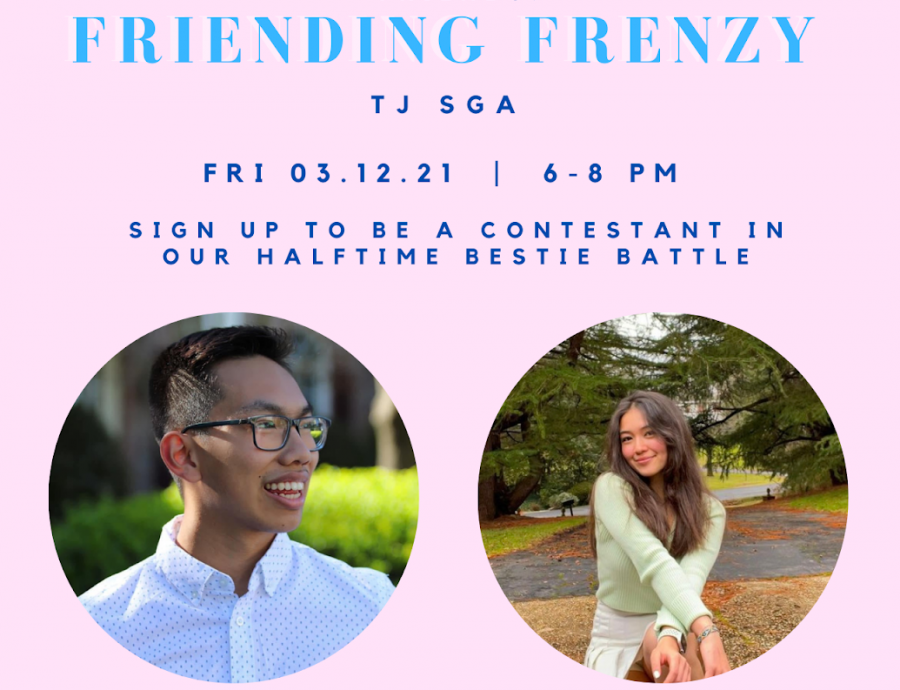 Senior Sean Nguyen and junior Christine Franklin participated in the Friending Frenzy halftime Bestie Battle. “I signed up for this event because I have some close friends in SGA and also to show my support. It’s really important to establish a solid community at TJ and I thought Friending Frenzy was a great idea to start that. I know that this year has been hard for many with reaching out and connecting, and when given the opportunity to take part in it, I was eager to help,” junior Christine Franklin said.

As the pandemic caused students to participate in virtual learning, many have organized creative ways to meet new people, and SGA is no exception. On Mar. 12 from 6 p.m. to 8 p.m., SGA held Friending Frenzy, a speed dating-style student meet and greet, over Zoom. The event consisted of multiple five minute 1-on-1 participant conversations where students of all grades could meet new people.

“I wanted to make an event dedicated to meeting lots of new people. Because of COVID there’s been restrictions on team sizes and masks [and] social distancing have made it hard to approach new people in person,” SGA Vice President and senior Tiffany Ji said. “So, we thought to remove the tension of approaching someone yourself. Students can just come to the event and be paired by moderators and [be] given conversation starters to facilitate the friend-making process.”

For freshmen like Annika Holder, Ji’s vision was helpful in meeting new people.

“I signed up because it’s super hard to make friends online, and a lot of times reaching out and taking the first step is hard, so [Friending Frenzy] took care of that,” Holder said.

Although there were some technical difficulties, the event overall was quite smooth.

“I think it went pretty smoothly. If this event was repeated or monthly or something, I think [that] would be cool. I personally had some tech issues but it only took a couple minutes to resolve,” junior Christine Franklin said.

During the middle of the event, Franklin and SGA President and senior Sean Nguyen were part of a Bachelor/ette style show called “Bestie Battle” where they embarked on a quest to find a new “bestie”. They each asked three contestants a series of questions with time limits for answers.

“It was a bit hectic moving between breakout rooms, but the halftime show went super smoothly. My favorite part was the Bestie Battle, and I can’t decide whether I liked watching the other contestants answer or answering myself [better],” Holder, who participated as a contestant for Franklin, said.

On the other side, Franklin found it fun to ask questions.

“I really liked asking other people questions. It gave me a good look into some individuals’ personalities and that was really fun for me,” Franklin said.

As the host for the event, Ji agreed with both Holder and Franklin that the Bestie Battle was the highlight of the night.

“I really enjoyed hosting the Bestie Battle game show. The questions Sean and Christine asked were really engaging and got funny answers from contestants. There was a lot of crowd engagement in the chat as well and participant numbers peaked during the show,” Ji said.

The people involved agreed that it was a lot of fun and would want to participate in the future.

“I would definitely be up to something like this again, really anything to encourage others to go make friends,” Franklin said.

Looking forward, Ji hopes that this event can return next year even if a full return to school is possible.

“Perhaps, in future years, SGA will be able to host this in-person and around Valentine’s Day. Unfortunately, I’ll be graduating,” Ji said.