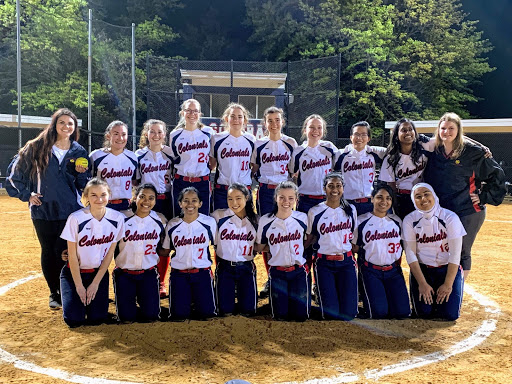 The Jefferson softball team’s official picture from the 2019 spring season.

Jefferson’s softball team held an interest meeting on Friday, Mar. 12 during B block to discuss the upcoming spring season. As a result of COVID, some changes were made to the typical season.

“Most of the changes will be logistical. This year’s season is shorter than normal, so we’ll likely have fewer games. They also start sooner after practices begin,” senior Emma Barnes said.

The practice schedule was also shifted. Since most players are currently participating in virtual learning, the weekday practices were shifted from 4:30 p.m. until 6 p.m. to 5 p.m. until 7 p.m. to accomodate for travel time from home to Jefferson. With the condensed season, the team might add some Saturday practices to ensure that it will be adequately prepared for games. Additionally, the season itself was cut in half, so players are now expected to play 12 games over the course of six weeks, averaging around two or three games per week. The first game of the season is against Wakefield on Apr. 27 at TJ.

“Honestly, I’m just relieved we have a season at all. I was terrified that I wouldn’t get to play my senior year, so the opportunity to play in a six-week season is very welcome,” senior Senna Keesing said.

With COVID-19 being a very real concern, policies are in place to mitigate the risk.

“The policies are a sort of joint venture between the Virginia state government, FCPS [Fairfax County Public Schools], and VHSL [Virginia High School League]—each has their own policies that teams need to follow before they can play, but they overlap so much that it’s not really clear where any specific guideline originated. In general, though, VHSL probably has the most direct control over TJ softball’s coronavirus policies,” Keesing said.

These policies affect everything ranging from tryouts to practices to games. Before joining the team, prospective players have to register for a tryout slot. When practices start, players will not be able to use locker rooms within the building, and team equipment will be sanitized before and after practice. There is also a mask policy in place.

These mitigation measures have been relieving to hear for interested students.

“I think I’m less worried about [COVID-19 impacting] softball, specifically since it’s generally a sport that doesn’t have much contact between players. However, there’s some parts of it that I understand but still worry me, like how they might allow batters to not wear masks since they need to run, so I’ve also been keeping that in mind,” sophomore Jessica Chung said.

However, many Jefferson students still hold reservations about participating in in-person events, which has contributed to less interest among students in trying out for the team.

“I do believe there [was] a lower turnout than normal, but I was pleasantly surprised by how many people came to the interest meeting,” Barnes said.

Other factors can also be at play. Even though Chung attended the interest meeting and still wants to play, she is likely sitting out this season.

“Both of my parents are immunocompromised, so I probably won’t end up trying out this year just to try and minimize risk,” Chung said. “There’s also some other complications that have arisen due to COVID. I would probably have to buy more [softball] equipment that would’ve been unnecessary last year because we [won’t] be able to use the school’s [equipment] anymore. I think I would rather avoid [that] if possible, so I’d rather wait until next year.”

Although the structure and schedule of the season has changed, many softball traditions will still remain.

“I’m really excited for senior night! We did an online senior night last year, keeping as many parts [of past senior nights] alive as we could, including driving to seniors’ houses to chalk up their driveways, like we’d chalk up the sidewalk leading to our field,” Barnes said.

Like Barnes, Keesing is remaining optimistic about continuing COVID-safe traditions.

“The traditions unique to softball are sadly ones that don’t mesh very well with COVID-19 — for example, [players eating] a shared bag of peanut M&Ms at every game. However, there are plenty of broader TJ sports traditions we’re excited to maintain, from senior night to spirit days on game days. They’ll definitely help bring a sense of normalcy to an otherwise strange season, while also being very fun,” Keesing said.