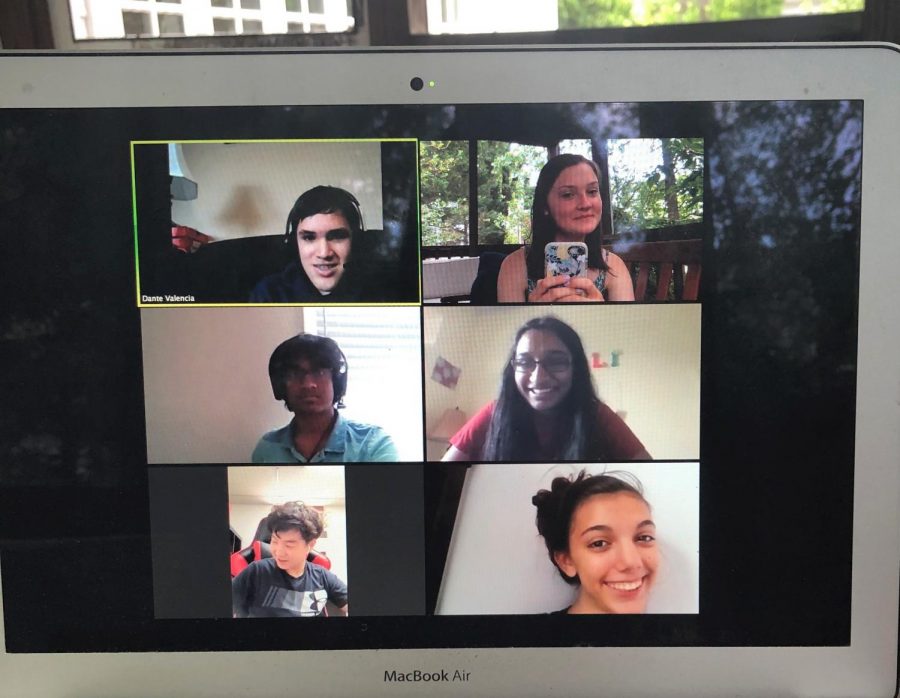 Sophomore Lauren Fisher, pictured top right, snaps a photo as she chats with friends during quarantine. For Fisher, these conversations were critical towards staying upbeat during the pandemic.

Quarantine provides sophomore Lauren Fisher with the realization that she had been overloading herself with extracurriculars and academics.

For Jefferson sophomore Lauren Fisher, her days before quarantine started were filled with numerous academic and extracurricular activities. But the closing of schools in mid-March interrupted Fisher’s busy schedule, allowing her to reflect on her priorities as a student.

When lockdown first started, Fisher found herself FaceTiming her friends for hours into the night. These daily sessions helped disrupt the daily boredom of quarantine.

I don’t think I realized that I was unhappy because I was doing all this stuff. I wasn’t enjoying interactions with people, or enjoying life.”

“I don’t know what I would have done if I didn’t talk to my friends. There was already so much monotony of the day that seeing any people was so important to not go insane,” Fisher said.

As March turned to April and the once seemingly long one-month break from school became a three-month venture into virtual learning, quarantine was an extended period of time that felt like a break. Fisher tried to not burden herself with the guilt of not being efficient and productive.

“I did sometimes freak out that I wasn’t being productive enough. But I think you need to go easy on yourself because you can’t really regret anything,” Fisher said. “There was a lot of stuff going on in the news, and there was so much uncertainty.”

Instead of feeling too concerned about her lack of productivity, the pandemic helped Fisher realize that it was okay to have more balance between academics and free time.

Fisher’s mentality and the time away from school allowed her to focus her attention on developing other interests and skills.

“I’m a lot more confident and outgoing, in the way that I look at life. I know I found a better balance of activities in school and in life,” Fisher said. “I had time to explore things that I enjoyed, like baking and biking.”

On March 9, Fisher returned to the Jefferson building for the first time in nearly a year.

“It felt like nothing had changed. It’s weird to leave some place for that long and then find it exactly how it was,” Fisher said. “Being in the presence of someone else helps me understand things better, and it’s really nice to actually talk to your teachers [in person].”