Wrestlers throw themselves into the winter season 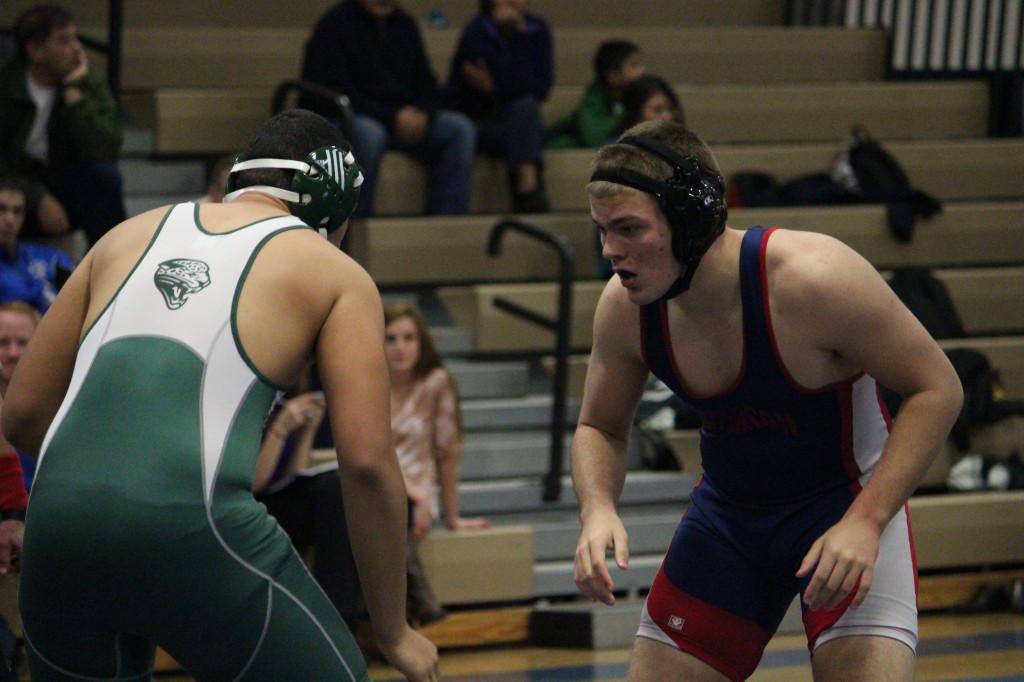 “I had no idea I was going to try wrestling and didn’t know much about it, either,” junior Taylor Yohe said. “Mrs. Murphy, our athletic trainer, told me the sport would be a great fit for me so I tried it out. I’ve loved it ever since.”

Yohe joined wrestling as a sophomore and made the varsity team. He’s not the only member of the team who hadn’t had any experience in wrestling prior to joining at Jefferson.

“I actually knew nothing about the sport until the first practice,” senior Giovani Basurto said.

Basurto joined the team freshman year after a group of seniors suggested that he try out. He wrestled several varsity matches that year and has been on varsity since. It was by attending the practices that he learnt more about the sport.

To those who haven’t ever seen wrestling, an easy assumption to make would be that the most important part of wrestling is strength. However, many of the wrestlers at Jefferson disagree that muscle is the only factor for success in the sport.

“It is a muscle sport in one aspect, but you have to have a lot of stamina if you want to make it,” sophomore Vincent Billet said.

Billett started wrestling in seventh grade. He accredits his early start mainly to the facts that his father used to wrestle and his uncle had been a state champion in Georgia. However, not everyone has his background. According to athletic trainer Heather Murphy, only one or two wrestlers with any prior experience come in every year.

“The ideal wrestler would have whole body strength and be able to be quick thinkers and strategize well to put opponents in moves and to get out of them as well,” Murphy said.

The Jefferson wrestling team practices six days per week for two and a half hours per session. Their practices include a lot of what would be considered typical for others sports, including warm ups, sprints and drills.

“There is a lot of technique involved in the sport so it takes time to get a hold of everything, but if you work at it, it will come just like anything else,” Yohe said.

Some of the exercises they do in practice include runs, stretches, practicing the “neutral” position and working on techniques and new moves. In addition, several times every week the team does matches for three 2-minute periods.

“Our conditioning is well known to be the hardest conditioning in any sport at TJ,” Basurto said. “We practice every day of the school week and Saturdays with matches scattered throughout.”

In addition to their vigorous practices, the wrestling team attends one to two competitions every week. On Nov. 13 and 24, the team had scrimmages against Annandale and Wooton high schools.

“There is usually a tournament every weekend, with an occasional meet during the middle of the week,” Yohe said.

“Wrestling matches are intense and while the only person that can fight the opponent on the mat is the athlete, it is great to see the coaches and teammates yell techniques, moves or encouraging words when the athlete is on the mat,” Murphy said.

Last year during the 2011-2012 wrestling season, the team ended with a Liberty District Record of five to three, beating their record from the previous season. This year so far, they have had a record of two wins and zero losses, including their first wins against West Potomac and Falls Church.

“It takes a true athlete to go out there on the mat in front of everyone and put their skills on display for everyone one to see. There is no one to hide behind or throw under the bus. It is a sport that defines the word ‘sport’,” Murphy said.

Since their first two scrimmages and matches, they have gone to the Northern Virginia Classic wrestling tournament on the weekend of the eighth where they placed twelfth overall.

“It takes a lot of time out of your schedule, but it is very worth it,” Basurto said.