Their winning streak is over, but TJMUN continues to succeed in virtual conferences 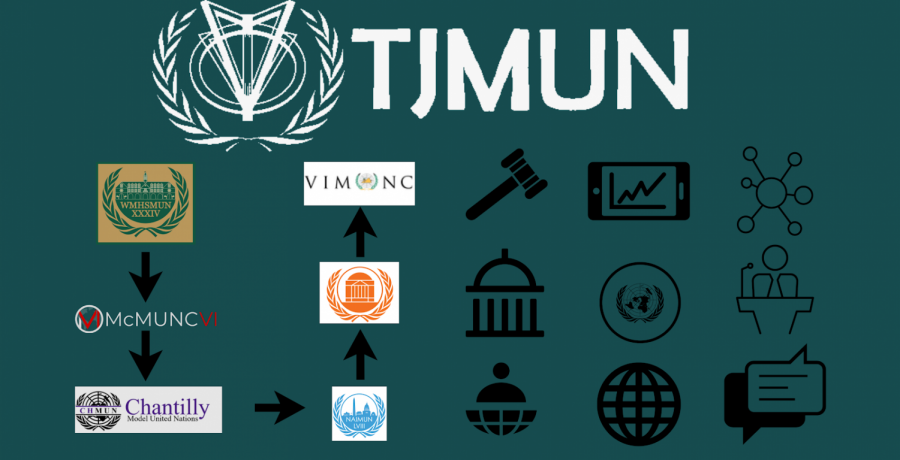 Despite a great deal of uncertainty coming from the pandemic, the Jefferson Model UN team worked tirelessly to prepare for the season, and their efforts paid off — Jefferson MUN won Best Large in multiple conferences.

With its myriad of inside jokes, inseparable community of members, and distinct culture, Jefferson’s Model United Nations (MUN) program holds a special place as one of Jefferson’s biggest clubs. MUN simulates the proceedings in the UN General Assembly, as well as “crisis” situations of various events. Participants, known as delegates, debate geopolitical topics and work with others to create solutions to the problems at hand.

MUN at Jefferson is often likened to a cult, since its members are often extremely close and devoted to the club and to each other.

“I would describe Model UN as being a group of people who are really tightly bonded to each other in the sense that they’re always there for each other. We’re more than just a club, we’re kind of a family,” senior Lisa Raj Singh, the Secretary General, said.

Since lockdown started in March, MUN conferences have been held virtually. As a result, MUN’s officers (collectively known as the Secretariat), worked with new and returning members to smooth out the kinks of holding MUN online.

“At the beginning of the year, we really didn’t know what to expect because it was the first year that we [had] had virtual conferences. It was really unfamiliar territory to all of us on Secretariat,” senior Vikram Raghu, Senator, said.

One of the main concerns about having MUN on a virtual platform was making sure that everyone was engaged and connected to each other. It could be tough for delegates, especially novices (first year members), to have the same level of engagement while talking to a screen as they had in-person.

“MUN, as an activity, revolves around building connections with people, talking to them, as well as speaking and leadership. Those core essentials are very hard to bring to life [in] the virtual setting,” Raj said.

The second main concern was ensuring that novices had the proper training to be ready to go to conferences.

“Part of our process as a club is that we have an extensive training program for underclassmen and novices. It took us really having to discover how these conferences will be run individually on these separate platforms,” Raghu said. “It really took a lot of adapting to the situation and engineering to get this season.”

However, through hard work and dedication from everyone involved, these problems were tackled effectively and the season is running smoothly.

“We were very pleasantly surprised, because competition season went really well this year,”  Raj said. “More importantly, we, as a club, were able to stay connected this year. We did a lot of team bonding events like Meme Night and Senior Roast, and we spent a lot of time with each other virtually.”

“We have never won Best Large at [NAIMUN], but this year we were able to pull it off, which was a really amazing experience for all of us to see something like that,” Raghu said.

Unfortunately, their “Best Large” winning streak snapped at VAMUN, a conference held at the University of Virginia. However, Raj thinks that the team’s loss at VAMUN was the most memorable moment of the season.

“More important than [the win at NAIMUN] would be at VAMUN, when we did lose. We were all on a call together afterward,” Raj said. “I thought I would be disappointed, but I really wasn’t, because that weekend every single club member worked as hard as ever in putting in so much energy. I could see that they were supporting each other so well, and at that moment, I was feeling nothing but pure appreciation and love for the club members.”

The season wraps up during the weekend of March 19-20 at Virginia Invitational MUN Conference  (VIMUNC), a local conference at Langley High School. After that, the members of TJMUN and the Secretariat will work to host their own annual conference, TECHMUN, which will be held between April 23-24.

“I just want to continue putting in our best. The most important thing is to maintain confidence that things will get better, and to continue being there for each other as a club,” Raj said.