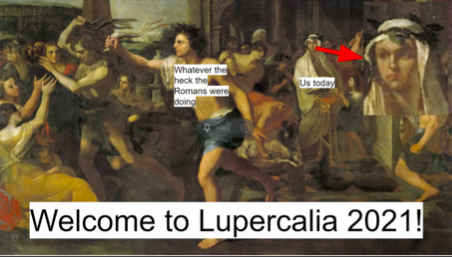 Over 60 students celebrated Lupercalia 2021 together virtually. “Virtual lupercalia was really fun because I got to be with the other Latin club members and learn about the festival, even though we didn’t get to whack people with (fake) goat skins,” sophomore Daniel Kim said.

On Friday, Feb. 12, Jefferson Latin students attended a virtual ceremony for Lupercalia hosted by the Latin Honor Society. Lupercalia, an ancient Roman celebration celebrating the she-wolf and the Roman god Lupercus, is usually held on February 15th and is still an important ongoing annual tradition for the Jefferson Latin community.

“A lot of people will comment that Latin is a dead language because it isn’t spoken anymore and therefore we don’t need to celebrate it, but that doesn’t mean we should ignore the language and the Roman culture associated with the language. It was such an important part of history,” senior Thomas Donohue said.

The earliest records of the celebration date back to almost the sixth century B.C., which involved animal sacrifices and different celebrations for Lupercus (the Roman god of fertility) and the she-wolf; who was said to have raised Romulus and Remus, the founders of Rome. Although Valentine’s day is named after St. Valentine, many historians believe that the day actually originated from Lupercalia celebrations.

“As a Latin student, [Lupercalia] is part of Roman culture and I think it’s important to continue to implement and remember them in our lives. Latin is not just about learning words, it’s also about the history and culture that went into those words as well,” sophomore Daniel Kimsaid.

Usually, Jefferson’s version of the Lupercalia celebration involves a spirited game of Rome-themed mafia. This year, the coordinators of the game had to redesign how they would be playing the game in a virtual setting.

“We wanted to keep the game pretty much the same, but on a completely different platform. So one of our main concerns was how to keep people engaged in the game, which is pretty hard when you can’t actually see anyone,” Donohue said.

In the end, coordinators Donohue and senior J.W. Strassberg decided to run the game on two different platforms: Google Meet and Blackboard Collaborate. While the main game would take place on the Google Meet, the ‘narrators’ of the game who were running the game behind the scenes would message players through Blackboard Collaborate in order to inform them who would be the mafia or healer. Players who were eliminated in the game would turn off their camera to indicate that they were no longer playing in the round.

“I honestly think it was a lot easier to run the celebration online to keep anonymity and there was a much better visual reference on who was playing and who wasn’t which really helped limit confusion,” Donohue said. “Mafia is definitely one of those games that work better virtually than in-person and I think it was a lot more engaging too.”