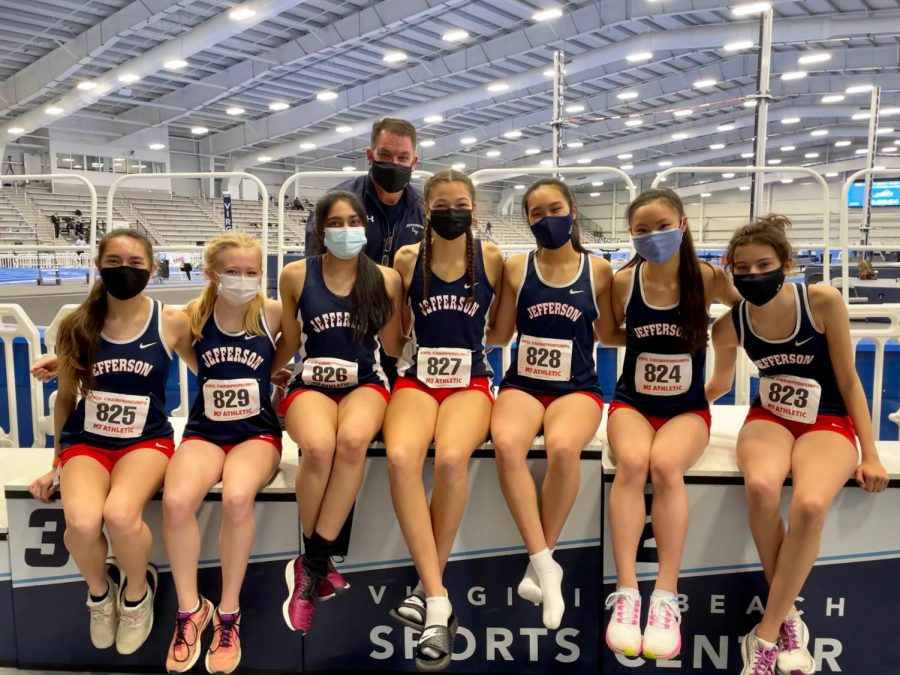 The Jefferson indoor track and field girls team competed at states in a new facility at Virginia Beach; they raced at a time separate from the boys team. “States are always a good experience. Just being with your friends, your teammates—you have a lot of fun,” junior Annika Topchy said.

The Jefferson indoor track and field team competed at the state championship on March 2. The meet took place at the newly built Virginia Beach Sports Center, so it was a new experience for everyone.

“It was pretty exciting,” freshman Pranav Velleleth said. “It was my first time running an indoor track, so [there] was a different vibe to it.”

However, an experienced state track competitor doesn’t feel that the event quite lived up to her previous experiences.

“This year, due to COVID, they split it [the groups] up, so there were a lot less people, and that kind of made it feel a little less exciting and important,” junior and varsity track member Annika Topchy said.

Despite the calmer atmosphere, the excitement from competing in states and running in a new sports center still remained.

“It was a new facility, a brand new sports complex, and I think everybody was really excited to run there,” Topchy said. “That was a really nice change compared to last years’ states and the years before that.”

After arriving at their assigned times with their groups, the racing began and results started rolling in.

Along with those results, girls placed eighth in the 4×200 meter relay with a season best time. Topchy placed fourth in 55 meter hurdles and in the 300 meter dash.

“I was like three hundredths of a second off my personal best time, so it was a good time but a little frustrating,” Topchy said.

Every personal best and race is connected to the track team as a whole.

“It [the TJ track team] had a pretty big role,” Velleleth said. “Especially the coaches with all the training and for morale during races.”

Their coaches played a big part in training and preparing track athletes for states, and the athletes themselves gave each other reinforcement and motivation.

“Our team is a really supportive team—we’re pretty close,” Topchy said. “It’s just nice to know that you have so many people supporting you, that they care about you, and they like to see you do well. I honestly think it helps your performance too; it makes me feel good about myself and it gives me some motivation to do well.”

As fun and supporting as friends are, sometimes just being on the track is enough to spark joy.

“I would say the best part was just being there on the track,” Velleleth said.

“I liked competing against a new group of kids because this whole season we’ve only done meets within our district due to COVID, so it was nice getting a new competition, and it was really fun to watch the races,” Topchy said.

New faces are refreshing to see, and motivation can come just from the rewarding sensation at the end of a run.

“It’s the feeling of finishing races, and that accomplishment every time you hit a personal best,” Velleleth said.