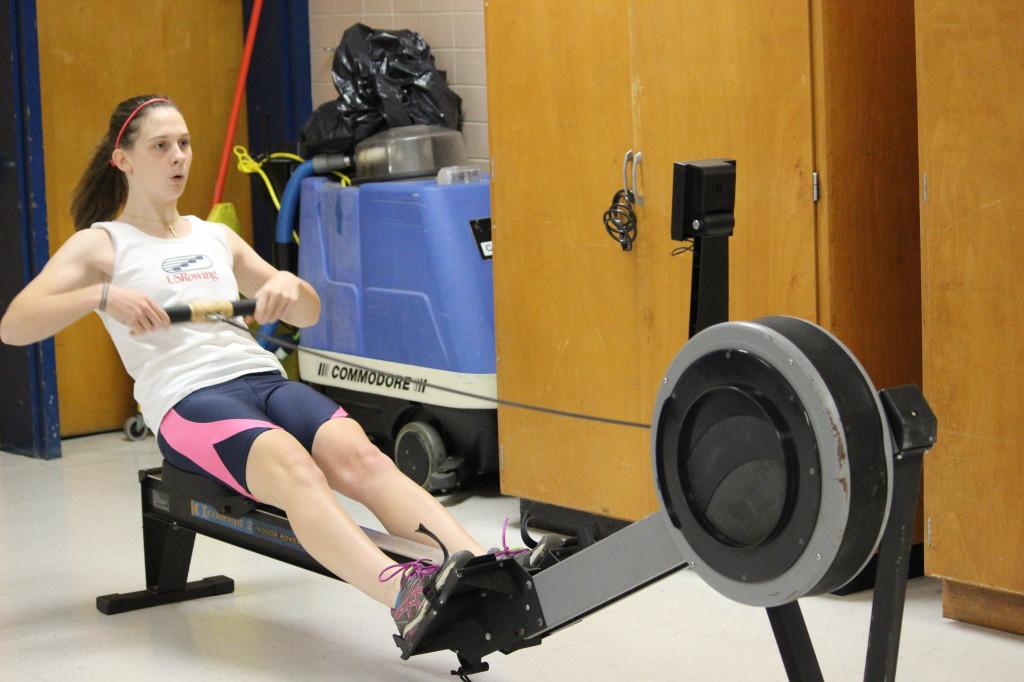 One year ago, senior Julia Arthur found herself intimidated. She had joined varsity crew as a novice and was surrounded by girls who had taken thousands of more strokes than her. She was behind, and it was evident that it was going to be difficult to catch up.

It was because she had started rowing later.

Jefferson athletes typically join sports teams in their freshmen or even sophomore year. Although those coming in as upperclassmen can find success in their sports, many face the difficulties of catching up to those who started earlier.

Arthur first picked up crew as a junior after suffering from injuries in contact sports, like soccer and basketball.

“I was tired of being injured, and after a concussion that sidelined me for around five weeks, I played one last season of soccer and called it quits,” she said. “I joined crew because I’m athletic, and it would keep me in shape and be good for my competitiveness.”

Initially, she found it difficult to be as fast as the other girls on the boat. She also joined a fall club rowing team, Northern Virginia Rowing Club (NVRC), to gain more experience.

“Honestly, it’s really tough mentally. Being on a varsity boat as a novice and knowing that everyone around me knew what they were doing while I really had no idea, was hard,” Arthur said. “Especially in the beginning of the season, I felt like I was letting my boat down because I just didn’t have the experience to be competent, as far as technique is concerned. It absolutely killed me.”

Although Arthur may have found difficulties adjusting after starting crew in her junior year, she now has many impressive accomplishments under her belt. She considers her greatest accomplishment to be making the top boat for NVRC, and getting to travel to Boston to race in the Head of the Charles regatta, the largest two-day regatta in the world.

“It was a privilege to even get to race. My boat was made up of girls from four different schools and had only been rowing together for about six weeks before the regatta, but we placed 16th out of 85, which I am monumentally proud of,” she said.

Coach Matt Shoop believes that Arthur has improved and grown immensely since the beginning of junior year.

“When she got here, I could tell she was a varsity athlete,” he said. “She’s worked really hard and come a very long way. I think she’s assimilated into the team and become a leader.”

Now as a senior, Arthur is currently doing winter training and hopes the team can succeed at the Stotesbury Cup Regatta and make Nationals this year.

“Sometimes I wonder about how fast I could have been or how good my technique could have been by now if I had started as a freshman,” she said. “Rowing was definitely one of the best decisions of my high school career.”

Although junior Eric Xie’s reasons aren’t the same as Arthur’s, he started on the Swim and Dive team this year as an upperclassman.

“I joined dive because it’s an interesting sport to participate in and watch as well,” Xie said, “and I didn’t have the endurance for sports like cross country and crew.”

He faces the difficulties that come with joining later with less experience.

“As a junior joining a sports team, not only do I have to work extra hard to catch up, but I also have to juggle my schoolwork and sports,” he said. “It can be intimidating to see everyone else pulling off amazing dives, while you are still working on basics.”

However, he has been training hard this season, practicing several dives that every novice would start with at the Club Run and Oak Marr recreational centers.

“Eric has been working very hard to be competitive. Considering this is the first time he has tried diving, he has picked up a lot of new dives relatively quickly,” Coach Charlotte Edwards said. “If he continues at this pace throughout the season, I believe he will be an accomplished diver. I am very proud and pleased with his progress and the team’s progress so far this season.”

Xie has started competing in matches, gaining more experience. He is excited for the season.

“Coach Charlotte has been working hard to get the beginners up to speed, and everyone’s been encouraging each other,” Xie said. “I’ve made good progress and feel confident about this season.”