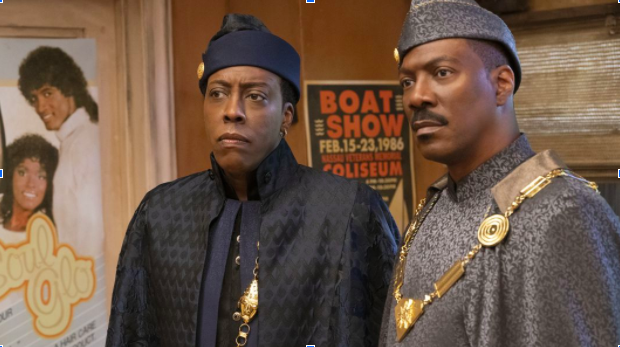 Economics teacher Malhaz Jibladze selects movies to show in the club, the most recent comedy being Coming to America, by David Sheffield and Barry Blaustein. “I show them something that they haven’t seen. Many are classic movies that their parents would recognize, and I want to share that with them,” Jibladze said.

Taking some time out of your day to relax and vegetate can have amazing benefits to productivity and mental health in the long run. Jefferson’s Awesome Association is a club where students can spend a block away from the hustle of Jefferson and watch movies. As it is not an academic club, it has a unique position within the Jefferson community. Jefferson economics teacher and sponsor of the eight period Malhaz Jibladze speaks to its importance for students, especially those in need of a break.

“There are a lot of clubs that focus on academics at TJ. Obviously there should be, but we do need to have an outlet. Awesome Association is specifically designed for that, where students don’t do anything. They just watch the movies,” Jibladze said.

Maxing out their participant list of 30 almost every block, the club is an easy filler for an open schedule. Not only only can attendees take a much needed 40 minute break, but they also have the opportunity to enjoy classic movies that you would otherwise be unable to fit in their busy schedules.

“You shut off your brain and enjoy a movie. Although we cycle through movie genera selections, I try to pick more comedies to watch. I want to lighten up a load of emotion,” Jibladze said.

Being one of the only of its kind, Awesome Association promotes the idea that not every moment has to be spent working. Jibladze expresses an interest in more of these relaxed clubs, where students can meet for the sole purpose of being social.

“These [clubs] could be really great. Anything that is not necessarily goal oriented, where students can go and participate in social activities, that would be perfect… I think students need to have that,” Jibladze said.

While there is an emphasis on enjoying films, the club can double as a study hall for students with extra work.
“You can switch on and off. One second you can catch up on some extra work, the next you can watch the movie. I think of it as a fun study hall,”sophomore Conan Ugaz said.

With a mix of unwinding and productivity, Awesome Association has earned its place in Ugaz’s schedule. Like others, the appeal of this free period looks beyond just the benefits of relaxation, and targets some of the more serious issues such as anxiety.

“It allows me to just de-stress at the end of the day. Having this period of relaxed activity is nice when I’m anxious about extra work, an upcoming test, or just life in general,” Ugaz said.

Awesome Association is open both 8th period Wednesday blocks and Friday A for anyone looking to alleviate some stress, and watch some movies. The next time there is a hole in your schedule, drop by and enjoy the film.