Wrapping up the winter sports season 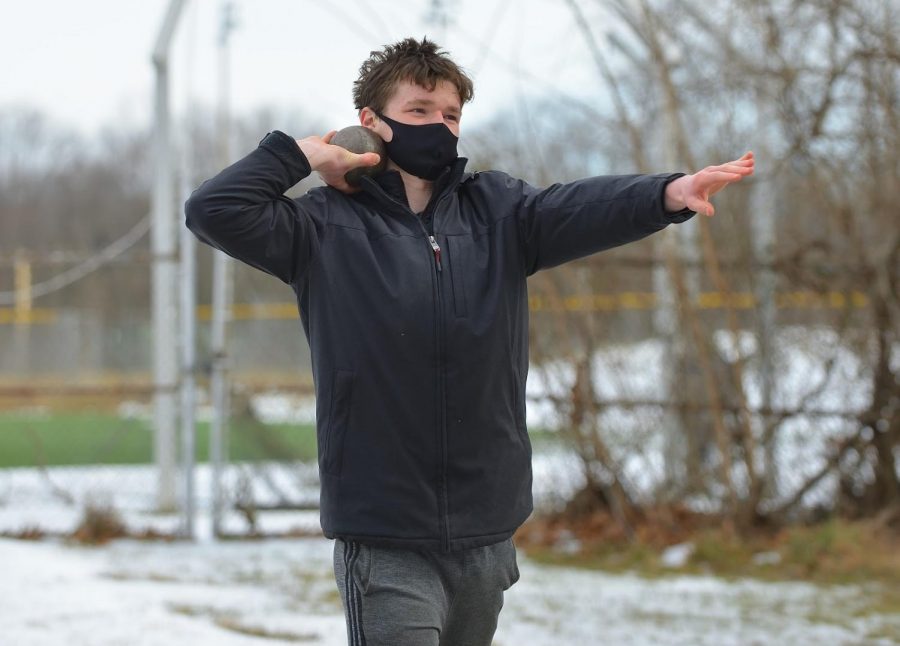 Junior David Lyons practices a shot put throw for track and field. “The only way [winter sports] could've been better is if we didn't have to work around COVID, so the only way to improve them would be for everyone to be COVID safe,” Lyons said.

Despite new mask and spectator regulations affecting sports, Jefferson athletes were able to make the most out of the winter season. While winter sports were still able to operate this year, athletes noticed major changes during practices and competitions.

After having participated in cross country during last year’s fall season, junior Ignacio Toro decided to do indoor track and field this year.

“We had to wear masks the whole time we practiced. Although that was something we could get, it took a lot of adjustment and just generally made things more difficult,” Toro said.

Junior David Lyons participated in both track and swim and dive for the first time this season. Besides new mask regulations, he feels that practices have not changed too much.

“For track, we had less practices than normal, three a week, and obviously there was social distancing for track and dive, and masks on for track, but other than those, practices were pretty normal,” Lyons said.

However, for a sport like wrestling, masks make practices even more difficult. Senior Brianna Ta returned this winter season for her fourth year of wrestling; she won districts and earned second at regionals. She noticed major changes made to practices and competitions.

“We are a lot more spread out during practice and always wear masks, except for when we’re running or live wrestling. We also kept virtual practices on Google Meets for those who are not able to come to in-person practices,” Ta said.

Ta does think that the guidelines for the winter season could have been more practical.

“I think that some of the rules are misguided. Not letting the wrestlers shake hands after literally wrestling each other for five minutes doesn’t seem to be helpful in preventing the spread of COVID 19,” Ta said. “I also wish wrestlers could’ve been tested before meets or on a weekly basis.”

In addition, to prevent the spread of COVID, a new regulation prohibits spectators from attending competitions.

“Even though we still had our team cheering us on, the vibe felt totally different without being able to see our friends and family in the stands,” Toro said.

For wrestling, there were no tournaments this year except for regionals and states.

“Even with those tournaments still running, they limited how many wrestlers could compete by only letting the top two qualify for each, rather than the top three or four previously,” Ta said.

Because of concerns surrounding COVID, many athletes – especially wrestlers – did not return this season.

“There were definitely a lot fewer wrestlers this year, which allowed us to have more focused practices, but also led us to losing most of our dual matches just because of the forfeits,” Ta said.

For wrestling competitions, you need at least one wrestler to compete in each weight class. However, if the team doesn’t have someone who can compete in that weight class, the match is automatically forfeited, which disadvantages smaller teams.

Some felt like there was a lack of communication between the county and the coaches about the season and how to deal with COVID regulations.

“My biggest complaint would be with the county itself, which oftentimes left the coaches and athletes in the dark, so it would’ve helped if they’d been a bit more transparent with their plans,” Toro said. “At the start of the season, there wasn’t very much certainty over whether the season would be happening at all, so we didn’t get many practices before tryouts and coaches weren’t totally ready to deal with the COVID adjustments.”

Ta experienced a lack of communication between teams, which negatively impacted the process of organizing meets.

“There were a lot of conflicting schedules online, and we weren’t sure when we would have meets. One time, we competed two days in a row and didn’t even know about the second meet until the day before,” Ta said.

While it is unfortunate that the winter sports season was made difficult because of COVID regulations, athletes were able to make the most of it and have a good season.

“Both the track and dive seasons went pretty well. There was a decent turnout and I felt like we did a good job of balancing safety and the sports,” Lyons said.