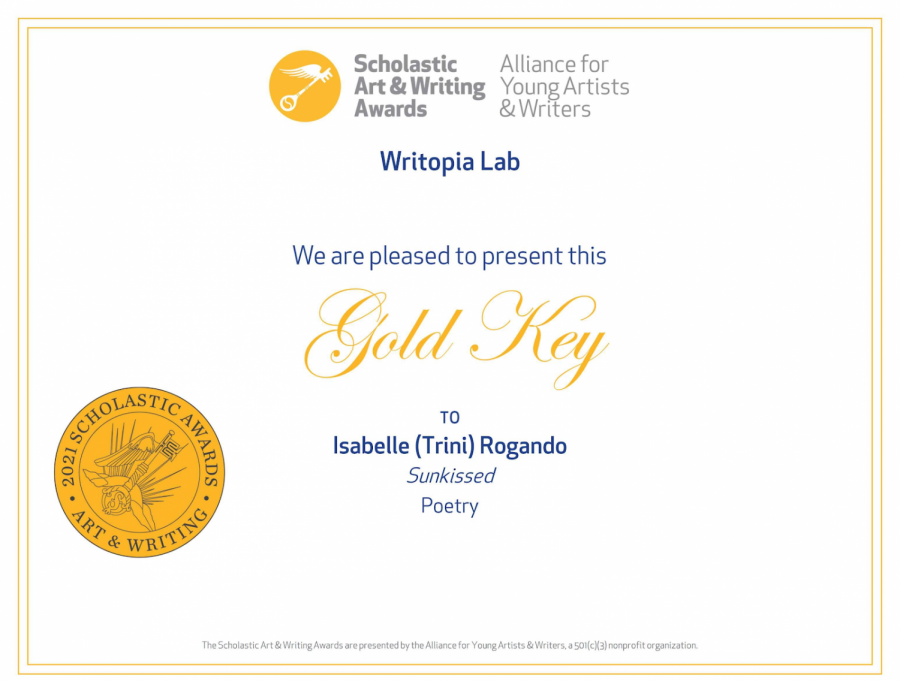 On Thursday, Jan. 28, Scholastic announced the winners of their 98th annual writing contest. With over 1,800 submissions in the DC Metro area this year, 60 Jefferson students received some type of recognition. Awards include the Gold Key, Silver Key, Honorable Mention, and American Voice Nominee.

“I think it’s really cool that I got an award, especially because I wasn’t expecting anything. I’m really happy the judges liked my piece. It was a unique topic I don’t think I’ve really heard anyone really talk about, so it was fun to research and write, and I was really excited that the judges felt the same way,” senior Jennifer Abraham said.

Abraham received an Honorable Mention for her critical essay titled “The Family Business of Child Exploitation: Protecting the Children of Family Vloggers.” In her essay, she discussed the importance of consent and how certain family social media accounts exploit their children to make money. As this year was her first year entering the contest, Abraham shared her motivation behind this particular topic.

“I was just annoyed by these family accounts I saw on YouTube. You can see the exploitative nature of the whole system of family vlogging. There was this one specific video I saw of a family. They accidentally posted it, but it was very aggressive and the kids just looked like they were used to it. It was just very upsetting to me, so I decided to write a critical essay about it,” Abraham said.

Freshman Angelina Richter’s work was also recognized by Scholastic, receiving a Silver Key for her dramatic script titled “The French Plague.” Richter, who has been passionate about writing since elementary school, shared more about how one of Jefferson’s clubs, Threshold, introduced her to the contest.

“We review people’s pieces, which they turn in for Threshold to publish. We basically have to read them, and it’s anonymous, but we revise the writing and that really helped me become a better writer,” Richter said.

Gold Keys are the highest award given out at the regional level. These pieces then advance to the national level of the Scholastic Writing Awards, which will be announced later this year on March 17. Junior Trini Rogando also entered the contest for the first time this year. Submitting 17 pieces of writing and winning awards for 14 of them, Rogando received a Gold Key for six of her works.

“Just practice a lot and take advice from other people. Be open to revision because if someone else reads your piece, they might have a different way of looking at it and offer ways to change it. Trying to improve yourself is a constant thing and you’re never really going to be the best, so you have to keep trying to improve. It’s a long journey, but mainly just practice,” Rogando said.